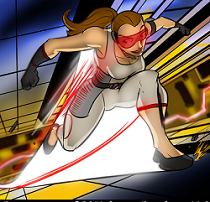 Deck Concept: Tachyon’s deck is fast. Super fast. While most heroes won’t get through their entire deck during a game, Tachyon rarely ever goes a game where she doesn’t go through her entire deck, which means you get to pull off all of her tricks. Play and or discard burst cards to power up her deadly attacks. Sonic Vortex—which almost gets the prize for best attack—deals X targets 3 sonic damage, where X = the number of burst cards in your trash, but it loses the top spot to Lightspeed Barrage which gets stronger with every burst card you discard. This card deals a single target X damage, where X = to the number of burst cards in your trash. Lightspeed Barrage caps out at a whopping 22 damage. Not many villains can survive a blow like that.

Deck Strength: Tachyon’s deck has innate card draw. Unlike other heroes, she doesn’t get tripped up by an equipment card discarding mechanic, and she copious amounts of damage when she pulls off her big attacks. She usually pulls off her big attacks every game.
Best Team Support Card: Fleet of Foot: Each Player draws a card. You may play an additional card this turn.
Best Personal Support Card: Pushing the Limits: You may play an additional card during your play phase and draw an additional card during your draw phase. At the start of your turn, either Tachyon deals herself 2 sonic damage or this card is destroyed.

Best Attack: Lightspeed Barrage: Tachyon deals 1 target X melee damage, where X = the number of burst cards in your trash.
Deck Weakness: You have to build up to her large attacks because her smaller attacks don’t do much of anything, especially if the targets in question have armor—and most do. If she can’t draw cards, Tachyon’s in big trouble. She doesn’t have a lot of defense and no healing factors, so she can deal out a barrage of damage, but she can’t take one. Then you have some game mechanics that make heroes shuffle their discard pile into their trash, and this mechanic kills Tachyon’s best attacks. It’s like starting the game over.
Worst Card: Sucker Punch: Destroy 1 target with 2 or fewer HP.

Ultimate Team-up: It’s as if the creative team behind Sentinels of the Multiverse made the Visionary to go along with Tachyon. The Visionary grants Tachyon extra draw power and allows Tachyon to discard a burst card (which powers up Tachyon’s excellent attacks). But that wasn’t enough, the Visionary also has a means of shielding Tachyon from damage and that’s always a good thing.

Tempest’s Reclaim from the Deep can allow Tachyon to play Lightspeed Barrage a second time without reshuffling her deck, which is always handy. Other than these two obvious teammates, Tachyon benefits from anyone else who can redirect damage or boost her damage so her smaller attacks aren’t useless. Here’s looking at you, Legacy.