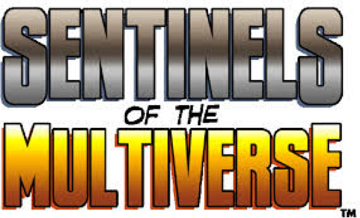 Game Flow and Review:
Assemble your friends and play as a team of super heroes. If you’ve ever wanted to be a member of the Justice League or the Avengers, Sentinels of the Multiverse comes close to fulfilling that dream. Really. Team members of the Sentinels are quirky amalgams of Avengers and Justice League members. But no, nothing comes close to having your own superpowers, but Sentinels comes as close as you can get to having powers without getting pelted with cosmic rays. 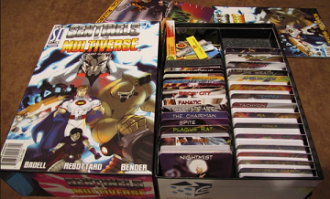 Sentinels takes the variable player power mechanic (where each player has their own hand of cards and powers) found in games like Munchkin and adds a co-operative element. To be fair, Sentinels acts a little like a Bridge version of Munchkin, where players have their own deck and team up to play against two dummy decks (the villain and environment decks: more on these two decks in a moment). But who knew that helping your buddies can be more fun than stabbing them in the back?

Players choose a hero. Each hero deck tweaks the basic rules and flow of the game, so you should try each hero to tell which style of play you prefer. These decks have different twists to them, so it doesn’t feel like everyone’s playing the exact same hero, but there is some overlap in powers.

Some of the heroes have a natural rapport: Wraith and Tachyon need draw power to get the most out of their decks, and The Visionary’s ability grants draw power to other players. Other heroes don’t work as well together. There are so many possible poor combinations, but the most glaring one would be having Fanatic—who should be renamed Martyr—in play and not have another hero who soaks up or redistributes some of the damage dealt by the villain. Speaking of which, there are a few heroes that can dictate who receives damage: Bunker, Legacy and Haka can act as bullet shields and re-directors, while The Visionary can generate decoys and even take herself out of battle until you draw into a better hand. But almost all of the heroes can deal massive damage to the villain given the proper circumstances. It’s finding the right conditions to meet these circumstances that can be frustrating and leads to the single concern of the game.

As I mentioned in the data above, games range between 10-90 minutes. That’s a huge window of time. Some games are over before they begin with the heroes or heaven help you, the villain with the decided advantage, while other games can slog on for close to two hours. Most games clock in between thirty minutes to just under an hour, so it’s rare that a game ends too quickly or drags, but it does happen.

Just like the superhero team, villains win if all the heroes are knocked out of the game, but some villains have win conditions separate from total domination, and that’s where hero abilities become important. Baron Blade (a mad scientist type) can win the game if he has 15 cards in his discard pile. (This win condition is explained as Blade’s villain trash fueling his tractor beam which causes the moon to collide with Earth.) But every time a hero defeats one of Blade’s minions, the minion’s card is placed in the trash, so you either have to take a lot of damage from Blade’s lackeys, focusing all the heroes’ damage on Baron Blade or someone has to play as The Visionary and use one of her abilities to shuffle the villain trash into the villain deck to avoid the villain’s win condition. 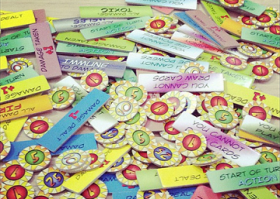 The publisher Greater Than Games adds new twists to the Sentinels of the Multiverse gameplay on a regular basis. They released an iOS app to keep track of hit points which is a godsend. Without this app you’ll clutter your table with several dice or counters. But my favorite addition to this game is the accomplishments page which mimics trophies for video games. I played a game with some friends on the Insula Primalis environment (the Jurassic Park look-a-like), and our team was getting owned by whatever villain we were playing, but then a hungry T-Rex from the environment deck was played and dealt the killing blow to the villain. We were upset that we didn’t actually win the game outright until we found out that “Let the T-Rex win” was an accomplishment, and we marked it on our accomplishment sheet as being completed.

Verdict: Yes. The gameplay can be unbalanced from time to time, and you’re flying blind when you first start this game (we’ll start a new blog series of which heroes work best together and against certain villains in the near future), but Sentinels is a blast to play with friends or by yourself if you’re hard up for other players. Besides, you get to have superpowers.