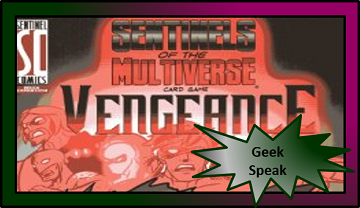 We’ll get to the superhero action in a bit but first, let’s get to the nitty-gritty.

Villains from the Sentinels of the Multiverse: Vengeance expansion

The inclusion of a villain team shakes up Sentinels of the Multiverse more than any other expansion. The mechanisms play smoother and faster than you’d expect, add another level of difficulty missing from previous expansions, and work with the theme of superhero/supervillain fights as many comics have supervillain teams. But don’t be fooled. None of these villains are any good on their own. They’re meant to be played all at once. I would’ve liked some standalone villains, but this is a small gripe.

Another small grievance is that the environments are bland and on the light side. This might be because you need an easier environment when you face five villains, so I dig that, but surprisingly, the heroes in Vengeance shine. I expected great villains in this set, but the heroes add a lot to the overall gameplay.

Setback and his unlucky tokens

I love mechanisms that have you sacrifice something in order to get something and ones that press your luck. Setback’s mechanisms fit both of these criteria, so I can see him as one of my new favorite sentinels. And speaking of Sentinels, the mini-team The Sentinels allows you to control a lot of smaller heroes, which gives you plenty of options and options are a great thing to have, but I’ve even played five heroes with three players before and that’s where The Sentinels come in handy.

Three players controlling five heroes used to mean that one person played one hero, while the other two players played two. With The Sentinels you can play the game in this manner and all three players get to play multiple heroes. Greater Than Games must be reading their fan messages, because I’m not the only one who plays the game like this.

The Sentinels mini-team within a team

The other heroes in this set are great as well. The Naturalist has interesting animal form mechanisms—and that fills a common superhero trope—while Parse fulfills another major superhero archetype, the archer. Sentinels had to include an archer with the popularity of Green Arrow and Hawkeye at all-time highs.

Overall, Vengeance is a great expansion that builds on superhero mythos and the game’s mechanisms.

While I’m tempted to say that Vengeance is the best Sentinels expansion, I think Infernal Relics keeps that title by a smidge, but you’ve got to love the direction Sentinels of the Multiverse is headed.