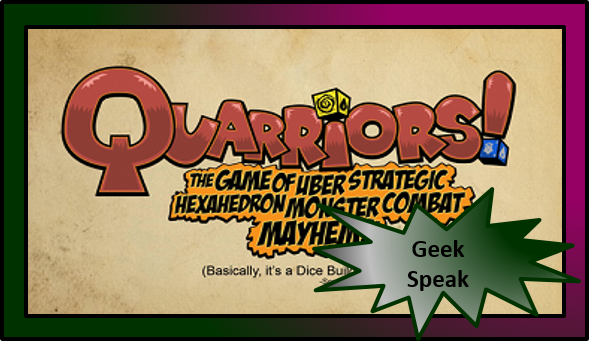 Take one of the hottest game mechanisms, deck building, add the random mayhem and speed of dice rolling, throw in a lot of Q words that aren’t actually words, and you get one exciting game: Quarriors. Should I throw in the title’s exclamation point? What the heck. Quarriors!

We’ll get to the fun stuff in a bit, but here’s some technical speak that we add into every review.

Each player starts the game with a pool of basic dice. These dice aren’t sexy but they even the playing field. We’ll get to what happens on a turn in a bit, but first let’s cover the sides of the dice you’ll see on these basic dice. Quidity, which looks like a raindrop and has a number inside the drop, allows you to pay for other, more impressive dice. Creatures have their own unique die icon and stats like health and attack.

Here’s what happens on a turn. First, you score glory with the creatures you have in play from the previous turn—bigger creatures garner more glory. Second, you grab five dice from your dice bag and then roll them. Third, you may play the creatures you rolled this turn. Then, you attack your opponents’ creatures with your creatures—your creatures attack strengths are dealt to each of your opponents simultaneously and attacking is not optional. And finally, your turn ends with you purchasing new dice from the wilds, a communal market of dice available to all players. Play then shifts to the player to your left.

The first one to reach the necessary victory points—the goal’s different depending on how many players are in the game—wins.

I wonder if the first time someone combined chocolate and peanut butter felt as good as this combination of deck building and dice rolling. I like both mechanisms a lot and I’m glad Quarriors! happened. The game plays like a dream. Sure, someone can roll into several creatures early in the game and dominate because their opponents can’t roll into anything, but the game’s relatively balanced.

I love the inclusion of multiple cards for the dice. These cards change each die’s effect and leads to some interesting combinations. The sheer volume of these combinations means that you won’t play the same game twice no matter how hard you try, and that’s always a great thing. I’ve also never seen anyone suffer from analysis paralysis—the inability to make a decision because of the sheer volume of options—even though Quarriors! has a lot going on. 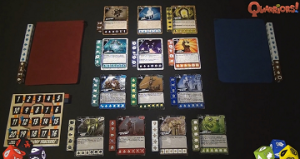 Overview of a Typical Game Layout

But the game does have some balancing issues. Inequality in creature powers happens. The big, bad dragon beats everything no matter what kind of dragon it is. If I’ve played too many games in a row with a dragon, I’ll take him out of the deck. There’s plenty more creatures to choose from. On the small end of the spectrum, the goblin type that adds the number of goblins you have in play to its strength is one of the few smaller creatures that’s worth picking up, but despite this inequity, Quarriors! doesn’t beat down players too much if they don’t have these creatures. 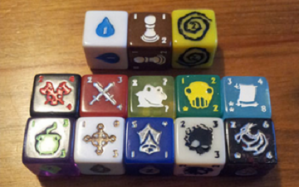 When I first covered Quarriors!, Marvel: Dice Masters just hit stores and in the last eight months or so, a lot of folks would say that Dice Masters, which now includes Dungeons & Dragons and Yu-Gi-Oh spin offs, has replaced Quarriors! as the dice building game of choice. I say, no.

I like both Dice Masters and Quarriors!, and the two games are different enough to warrant space on your shelf. Even though Dice Masters has a low price point ($1 for a booster and $20 for a base set), it’s still a collectible game and you can sink a lot of money on it. Quarriors! is self-contained. You can choose whether or not to buy the new expansions that come out every quarter or so. 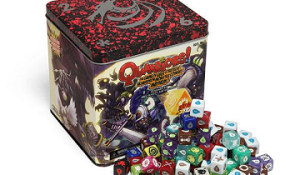 Also, Quarriors! speeds up the deck building mechanism, while there are some collectible games that move faster than Dice Masters.