You and your team are stranded in a vast desert. You have to find the parts to a flying contraption—circa Jules Verne—and escape before the sandstorm gets too great, or you or one of your teammates runs out of water, or a sand dune buries you alive.

The gameplay is straightforward and easy to learn, but Forbidden Desert’s complexity lends itself to multiple plays. You can play the game many times and never get the same result twice. Each player has their own ability (variable player power). The water bearer can fetch and carry more water than anyone else and can share it without taking an action, the explorer can move multiple tiles per action (instead of the customary one) if they bring a teammate, and the archeologist can remove more sand per action than anyone else to name a few. Then, there’s the Action Point system that guarantees fluidity.

Each player is given four actions per turn and you can use these actions for any of the following: movement (1 adjacent tile), fetching water, trading water or gear, excavating a tile (to see what’s beneath the sand), removing excess sand (sand tiles), pick up a part to the flying contraption, and even some special player abilities. Depending on the game’s circumstances, you could use all your action points on the same action four times, or you could mix and match. Keep in mind that you’re playing against the desert.

The desert has a deck of cards. After a player spends all their action points, they have to draw cards from the desert deck, and the number of cards they draw from the desert deck is indicated on the storm thermometer. You start by drawing two cards a turn, but you can draw as many as six desert cards in one turn. There are three types of cards in the desert deck: tile movement cards, “The Sun Beats Down,” and “The Storm Picks Up.”

Every game of Forbidden Desert starts with the desert tiles arranged in a five across, five down pattern with one tile missing in the middle—kind of like those sliding tile puzzles with one tile missing so you can move the other tiles around to solve the puzzle. The one missing tile in Forbidden Desert functions like the missing tile in a sliding tile puzzle. Whenever you draw a movement card, you’ll see one, two, or three tiles and a direction. You have to move the number of tiles indicated on the card in the direction shown if possible—you need to keep the five by five tile shape. If a desert tile is moved, you add a sand token on top of it. If you run out of sand tokens, the desert buries you and you lose, so you’ll want to remove sand tokens from desert tiles before you run out of tokens.

You also lose if you or any member of your team runs out of water. Each time you draw into “The Sun Beats Down” card in the desert deck, every team member not protected by a tunnel or a sun dome card (gear) loses one water level.

But that’s not the only level you keep track of. The storm thermometer tells you how many desert cards you draw at the end of a player’s turn, and the “Storm Picks Up” cards have you increase the storm’s level. If you reach the top of the storm thermometer, your team loses. So every game has a timer. Eventually, you’ll draw into enough “Storm Picks Up” cards to lose the game. Speed is crucial. 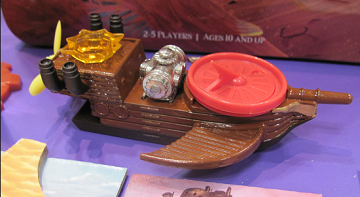 Let’s talk about winning. You have to excavate in order to win, and when you choose to excavate on your turn, you have to have no sand tokens on the desert tile you want to flip over. The reverse side of each tile can have gear, a well, a mirage, the landing pad (for the flying contraption), or one of two locator tiles for the four items used to construct the flying contraption. It’s the last part that impresses me. Each part (for the contraption) has two tiles that indicate horizontal or vertical location of the part. You have to find both to locate the part. As soon as the second locator tile is revealed, you place the part on the space where the two arrows the locator tiles are pointing to intersect. 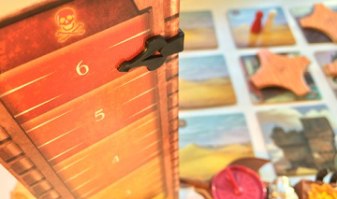 Keep in mind that these parts can shift with the desert sands, and that’s the beauty of Forbidden Desert. A path you thought existed at the end of one turn may change or even disappear by the time your turn comes around. The game does a perfect job of simulating an untamed desert. The game’s difficulty makes it feel like an accomplishment when you win.

Verdict: A tough but fair cooperative game that challenges its players. Deserving of the Mensa Game of the Year, Forbidden Desert has you coming back for more until you win, and you then you set it down for a while because you’ve won, and you rock.