Long ago the Chinese emperor offered a giant panda to the Japanese emperor as a symbol of peace. Your job as a member of the Japanese imperial court is to make sure that the panda’s well fed, and that its bamboo garden flourishes. 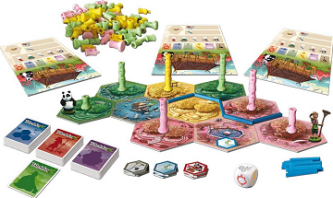 Takenoko—that’s bamboo shoot in kanji—may look like a cute game, but it hides a mean strategy game streak and nuanced gameplay we’ve come to expect from Antoine Bauza games. You start the game with a player sheet, two action chips, and three cards (one from each deck). The objective cards represent what you need to accomplish in order to have the best bamboo garden ever. As soon as one player finishes eight objective cards, they earn the emperor card (as they gained the emperor’s favor for being so awesome), and every other player gets one final turn. But how do you complete objective cards? You perform actions. The player sheet keeps track of your supplies and what type of actions you have at your disposal. 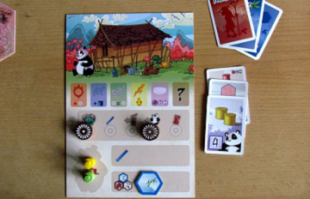 You get two actions a turn—denoted by your action chips—and you can choose from five actions: drawing plot (of land) tiles, picking up an irrigation stick, moving the gardener, moving the panda, and drawing another objective card.

You start with the pond tile (the only blue tile). Every plot tile you place adjacent to the pond tile is considered irrigated. An irrigated plot tile spawns one bamboo shoot (unless it’s fertilized, and then it gets two bamboo shoots). You can use irrigation sticks to irrigate plot tiles that don’t get placed next to the pond. You don’t get charged an action for placing an irrigation stick—you only get charged an action for taking an irrigation stick—so it’s a good idea to grab as many of them as you can. When you choose to draw plot tiles, you draw the top three tiles, play one of them, and then put the other two on the bottom of the pile. Tiles come in three colors: pink, yellow, and green. The bamboo matches the tiles. Now let’s talk more bamboo shoots or takenoko.

And you’ll need plenty of bamboo. The panda moves the same way as the gardener, but he doesn’t behave the same way. Where ever you move the panda, he eats the top most shoot of bamboo. Whenever he does this, you place the bamboo shoot in his belly, located on your player sheet. Now you’re ready to win by completing objective cards. 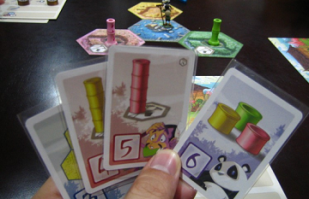 There are three card types: panda cards (purple), gardener cards (red), and tile cards (blue). Each card has a number in the lower left-hand corner, indicating the number of points you earn for completing the card’s objective. You have to move the panda and have him eat a certain color of bamboo to complete a panda card. Gardener cards necessitate a certain number, color, and height of bamboo shoot (you have to match what’s shown on the card exactly). Tile cards require you to match the pattern indicated on the card—again, this has to be exact—and each tile needs to be irrigated. You don’t have to complete these requirements on your turn. If you draw into a tile card or gardener card and the conditions are met, you get credit for the objective.

The weather die adds yet another wrinkle to the gameplay. Each player rolls the die at the beginning of their turn, and they gain an ability based on what they roll. The Sun gives the player an extra action. Rain grows bamboo on one tile. Wind allows a player to take the same action twice—when you usually take two different actions per turn. The Storm scares the panda, and you get a free panda movement that doesn’t follow normal movement rules. And then the player can pick up an improvement chip—indicating automatic irrigation, panda don’t eat (this bamboo), or fertilized—for plot tiles whenever they roll The Clouds.

There’s enough variety to Takenoko that makes each game unique, and you get plenty of strategy. I suggest starting with panda cards in the early game and then switching to either gardener cards or tile cards, depending on how much bamboo exists on the board. If you have a lot of bamboo, choose gardener cards. If you don’t have that much bamboo, choose tile cards. That’s my personal preference, but there are many ways to win with this deceptively deep game.

Verdict: Don’t be fooled by the cute aesthetic. This game delivers the strategy game goods while still offering a fun experience.