The first lady of comic books Wonder Woman has had an odd history, both in terms of how she came to be and with the path, or more exactly, the paths she’s taken. Hi. Uncle Geekly here and while I could address Wonder Woman’s creation story, we’ll spend today covering some of the greatest Wonder Woman stories for readers new to comic books.

Believe me. There are so many origin stories for Wonder Woman that Greg Rucka in his latest Wonder Woman run addressed them in DC Rebirth (2016-2017). That story just missed the cut, but it’d be a great honorable mention for this list, and I recommend reading that one too if you have the time. Let’s get to the ones that did make the list.

The writing is dated but Wonder Woman Chronicles Vol. 1 collects the original appearances of Wonder Woman in chronological order, so Steve Trevor makes an appearance–perhaps too much of one. Despite a shaky beginning, this volume shows how Wonder Woman promoted female empowerment long before it became commonplace. Heck. Wonder Woman was the first female superhero and while her origins may be humble (Diana takes on the name Wonder Woman because her mother gives it to her and she does a lot of what she does for Steve, a man she just met), these stories laid the ground work for an icon. 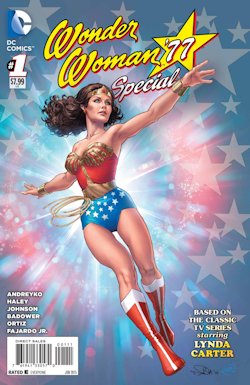 Initial writer Marc Andreyko wanted to use “under-appreciated” Wonder Woman rogues and include them in the series, since the television series’ limited budget didn’t allow from them. As a result, classic Wonder Woman villains like Cheetah, Silver Swan, and Doctor Psycho received the Wonder Woman TV treatment they never had and Andreyko does such a great job including them that folks won’t remember that they were never in the original series—or maybe they will.

Anyway, Wonder Woman ’77 is a great series for fans of the Lynda Carter TV show or for people who may have missed the original show and don’t want to sit through the dated special effects and again, dated writing. This series does a great job of cleaning up some of the television show’s shortcomings. 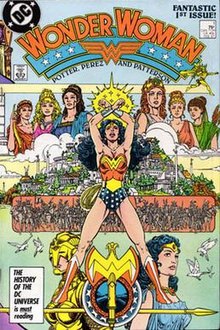 Gods and Mortals is a quintessential Wonder Woman story. After Marston’s Golden Age run and Crisis on Infinite Earths, the quality of Wonder Woman was—how to do I put this kindly—a mixed bag. George Perez relaunched the Wonder Woman title and he abandoned Diana as a marginalized member of the JLA’s boy’s club. He took Diana back to her feminist roots and made Steve Trevor and Etta Candy (one of Wonder Woman’s closest friends) rich and layered characters. Perez deployed a sense of fatalistic realism as the Amazons put themselves in a self-imposed exile after Queen Hippolyta (Diana’s mother) was put into bondage and raped by Hercules.

As you can see, Gods and Mortals took risks that many in the comics world would’ve taken at the time, but the end result was Diana standing on her own, apart from the Justice Society and Justice League. She didn’t need the male pantheon for support, and it was Gods and Mortals that made Greek gods regular characters in Wonder Woman stories.

Paul Dini of Batman: The Animated Series fame crafts an understated moment between Diana and Clark Kent having coffee and swapping tales. Artist Alex Ross does a great job rendering these moments of Clark and Diana enjoying each other’s company one instant and the Amazonian Warrior lifting tanks, taking on armies, and fighting for women’s rights the next. Spirit of Truth may only come in at 64 pages, but it captures what makes Wonder Woman an endearing character.

The Hiketeia takes an intriguing look at the ancient idea of justice in the modern world. When Diana meets Danielle Wellys, Danielle evokes the ancient rite of Hiketeia and bonds herself to Diana as Diana’s supplicant. In return, Diana must ensure Danielle’s protection, but little does Diana know that Danielle has been on a murder spree to avenge her slain sister. Danielle’s actions attract the attention of the Furies of Greek myth, seeking vengeance for the victims, and Batman.

Batman and Wonder Woman’s views on justice differ as Diana marries fairness with justice. The Hiketeia does a great job showing how two thirds of DC’s trinity interact as they have a respectful but adversarial relationship. 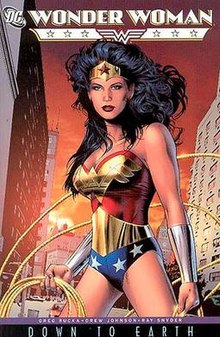 Down to Earth is an unconventional superhero story as Wonder Woman doesn’t stop villains or save the world; she shares her ideals in a book of essays and others try to tear down her philosophies. A lot of this backlash originates with the mysterious Veronica Cale—who functions like a female Lex Luthor—and she pulls all kinds of strings that make Diana’s life difficult. The book even creates tension in Mount Olympus with the gods, which doesn’t end well for Wonder Woman in the long run.

Down to Earth is another great story by Greg Rucka, and it does a lot to set up many of the events in his excellent four year run of Wonder Woman. 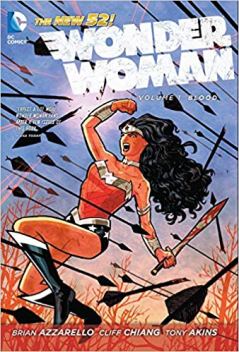 Brian Azzarello’s run on Wonder Woman: The New 52 was amazing. It embraces Diana’s Greek mythological roots and bends these same classic Greek myths, turning them into something new and exciting. Every step of the way you’ll stop and think that’s so Hades or that’s so Poseidon and Diana the daughter of Hippolyta and Zeus fits right in. The ending doesn’t disappoint. I won’t ruin it here, but Azzarello does a great job of pacing and taking what makes these characters who they are—both Greek myth and comic book characters—and blends them together seamlessly.

That’s my list for readers who are new to Wonder Woman comics. There are so many to choose from—decades after decades in fact—and I’m sure I missed more than one, two, or five hundred. Be sure to list some in comments. I’m sure Jim will prefer your picks to mine.