Is there snow in forecast or is it Anime Season? I’m sure our resident anime/manga geek Season appreciates the joke at her name’s expense. She’s going to break down why the Death Note anime is better than the manga. Take it away, Anime Season.

Usually, it’s the other way around, right? The manga typically doesn’t include huge filler arcs and has a more consistent flow than the anime. Typically. In the case of Death Note, not only does the format in which it’s presented in the anime suit it better, the ending has a more accurate depiction of a certain character in the anime than the manga. Spoiler alert. Let’s get started.

The first issue with the Death Note manga is the type of storytelling Ohba is presenting. Death Note is a detective story with supernatural elements and is dialogue heavy. I mean very dialogue heavy. Page after page of the Death Note manga contains blocks of text as each of the characters expresses their thoughts. This doesn’t allow for good flow in the manga since it’s easy to zone out in the sea of text. I had to go back on several occasions just to appreciate the artwork (which Obata did an amazing job of). In Death Note 13: How to Read, Ohba states that he cut down on a lot of the text. Dude, what did you originally have? Never mind. I don’t want to know.

As far as the anime goes with the dialogue, that much of it is fine. As a viewer, one doesn’t have to read the text (unless you’re watching it subbed) and can just listen and watch the characters’ reactions. Since it’s animated in this format, even if the characters talk a lot, they’re also moving and doing other things. For instance, L is always stacking or making something out of, say, coffee creamer pods, while he talks. This keeps the viewer engaged while progressing the story. The manga does show this, but since it’s depicted in a panel and the reader is focused on what L is saying, it gets lost. There is a segment in the manga (I believe it’s in volume 11—don’t quote me on that) that has several panels of pictures, showing what each of the characters is doing. More of that should have been included.

My second point contains major spoilers. Read at your own discretion. The ending in the anime made way more sense than the ending in the manga. For those who have seen Death Note in both formats and disagree with me, hear me out. In the anime, Light runs away, wounded, and collapses on a staircase in a warehouse, with Ryuk writing Light’s name down in his Death Note, killing him. In the manga, Light has a panic attack after getting shot several times and begs Ryuk to save him. Ryuk still writes Light’s name down in his Death Note and kills him. Ryuk killing Light was foreshadowed in both the manga and anime versions, so that was fine. Light freaking out in the manga and begging Ryuk for his life was not. That isn’t Light’s character. In Death Note 13: How to Read, Obata states that he wanted to express all of Light’s pent up emotions in one huge psychological breakdown. Basically, he wanted to draw Light in anguish just because he could. Again. That isn’t Light’s character. 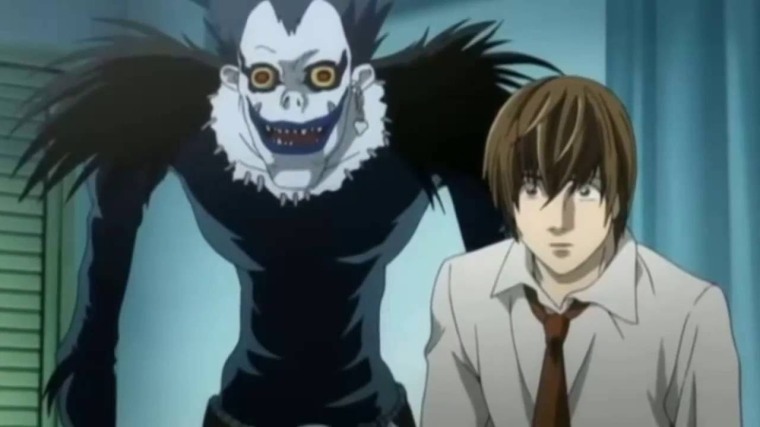 A cult dedicated to Light (Kira) was also shown at the tail end of the manga. Why? I can understand that people still worship his ideals, but this makes it look like there’s going to be a part two to the story. I don’t think there will be twelve years after the final volume was published, but this is unnecessary. This is something the reader can infer based on the general public’s reception to Light throughout the series.

I’d recommend the Death Note anime over the manga, but that doesn’t mean the manga is horrible. I don’t think the Death Note concept suits the manga as well as it does the anime. For those who have seen the anime and are looking for something to read the manga will definitely keep you occupied for a while.

Did we miss anything? Do you agree with our arguments? Do you prefer the Death Note anime or the manga? Let us know in the comments.

One thought on “Death Note: The Anime is Better Than the Manga”