Gather your herd of plant-eating dinosaurs while avoiding those pesky carnivores.

Super Tooth is an easy to learn set collection game, geared towards a younger audience. This light and fast game can introduce kids to gaming and to new dinosaurs.

We’ll get to the game flow and review in a bit but we have to cover the technical stuff first. 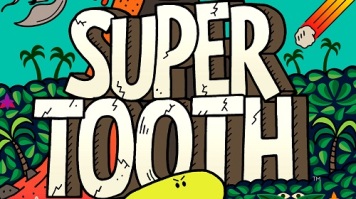 The object of Super Tooth is to collect three teeth – or super teeth – before any other player. You earn teeth by collecting sets of herbivores. We’ll talk more about collecting herbivores in a short while but let’s set up the game first.

You begin the game by shuffling the Super Tooth deck, and at the beginning of each player’s turn, including the first player’s first turn, you place cards from the draw pile face up until there are three face up cards in the landscape (central playing area).

Example of the central playing area

On your turn, you may add all the face-up herbivores of the same type to your hand. Let’s say that three iguanodons wander into the landscape on your first turn. You lucked out and can grab them for a set and one super tooth, but most of the time, you’ll only be able to add one plant-eating dino card at a time to your hand. Thankfully, you have no hand size. Collect to your heart’s content.

A set of three plateosaurus

If you don’t have the carnivore’s dinner handy, you can also use the triceratops to chase them away. While you can collect three or more triceratops for a set, just like any other herbivore, you’ll want to keep them on hand just in case you run across any meat-eaters because if you don’t appease or scare off the carnivore, you’re not collecting an herbivore.

There’s a third type of card: events. These cards can be good, bad, or indifferent. I won’t go into detail about what each event does but keep in mind that each one has a global effect of some kind. 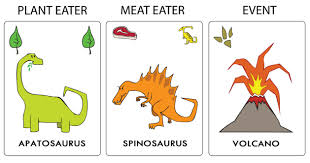 At the end of your turn, you may exchange sets of herbivore cards from your hand for teeth. Three of a kind gets you a tooth, four of a kind earns you a tooth and an extra plant-eater from the landscape, you get two teeth for five of a kind, and if you collect and turn in six plant-eaters of the same type, you win with an automatic three teeth.

Super Tooth is easy to learn and quick to play, which is perfect for a filler game (a short game you play in between, or as a warm up to, longer games), but I don’t know if it has a lot of appeal outside of the younger demographic Gamewright has targeted.

What comes in the Gamewright version of the game

Luck plays too large of a role for me to suggest Super Tooth for older gamers. Did you see how I ended the game flow with a whopping six of a kind winning you the game? Yeah, that’s not happening. Super Tooth devolves into a simple flip the card over and react to it game, and the best way to win is by collecting three plant-eaters and then turning them in as soon as you get them. Repeat this process until you have three teeth.

Most of the events are neutral and some are even interesting. One event adds another card to the landscape, so you have four cards in which to choose. Another event, the meteor, resets all other rules and benefits gained from other events and discards all the cards in the landscape. But there is one event that forces players to turn in their hands to a communal pot, shuffle all the cards, and then redistribute the cards evenly to all the players at the table. What’s the point of me collecting cards when the game takes those cards away from me?

Okay, I see why that one hand stealing event’s in the deck. This mechanism levels the playing field so adults can’t gang up on kids, and this illustrates how Super Tooth is geared toward young children of about five to eight years old.

Super Tooth is fun for the younger crowd (5-8 years old) but older gamers might want to look elsewhere like Dominant Species for their dinosaur card game adventure.