First Appearance: Sentinels of the Multiverse: Base Game
Who she is: The master of light, Citizen Dawn always prepares, perched to take on the heroes of the Multiverse
Initial Side: Leader of the Citizens of the Sun
Innate Power (Initial Side): At the end of the villain turn, Citizen Dawn deals the hero target with the highest HP 2 energy damage.
Advanced Power (Initial Side): Increase all damage dealt by Citizens by 1.

Villain Cards that Begin Game in Play: 3 Citizen cards, which are smaller villain targets who have unique abilities that don’t do the heroes any favors.
How she flips to her other side: If there are 5 or more citizens in the villain trash.
Nemesis: Expatriette

Most Fiendish Ongoing Card: Luminous Leadership: Increase each citizen’s maximum HP by 1. (Whenever a target’s maximum HP is increased, that target’s current HP is increased by the same amount.)
Most Fiendish One-Shot Card: Devastating Aurora: Destroy all hero ongoing cards. Destroy all equipment cards. Destroy all environment cards.
Most Fiendish Villain Target Card: Citizen Truth (HP 7): Villain targets other than “Citizen Truth” are immune to damage. Reduce damage dealt to “Citizen Truth” by 1. When “Citizen Dare” is put into play, this card deals the hero target with the highest HP 3 melee damage; destroy this card. 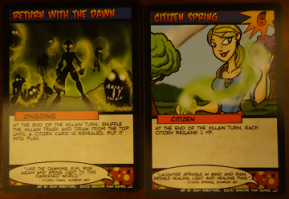 How to Defeat Citizen Dawn: Dawn’s biggest asset is her army of citizens. Global damage works best against these pesky ne’er-do-wells, but if she has “Citizen Truth” in play, you have to get rid of him or else he provides a shield for every other villain target, including Citizen Dawn.

Tempest works best for global damage. If you have him on your team, you can have Tempest knock out the weeny citizens, while other players concentrate on Dawn herself. If you don’t have Tempest on your team, you’ll have to spread responsibilities between citizen damage and damaging Dawn with each hero.