You are a mad scientist inventing crazy machines to conquer the world; you even get your own set of minions. Can you build the best arsenal?

We’ll get back to Gru (Despicable Me) and company in a bit but let’s get the technical babble out of the way first. 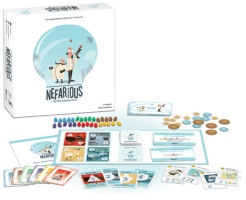 Every player starts with four of the same action cards (that denote the types of actions you can take; more on them later), five minions, three invention cards, and ten million dollars. You have to say that last part like Dr. Evil.

The goal of Nefarious is to build inventions. The first one to reach 20 victory points—or more—of inventions wins.

The four actions you can take on a turn are Work, Research, Invent, and Espionage.

Research earns you two million dollars and allows you to draw another invention card. We could all use options.

Invent lets you play an invention card. You want to invent things as often as possible. 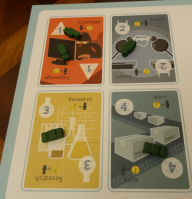 Minions split between all four actions

This allows you to either spread out your minions so you get money more often than not.

Minions loaded up on one action

Or loading up your minions on one action, so you can make a lot of money whenever an adjacent player takes that action.

Now that we have the actions out of the way, let’s take a closer look at the invention cards.

Invention cards have a cost, in millions of dollars, in their upper left hand corner. The victory points they grant you are in the bottom left hand corner, along with any effects the invention might have. A green arrow pointed at you means that you’re affected by the invention. Three red arrows pointed away from you are effects that affect your opponents.

Some effects can affect your and your opponents’ money.

Others target your or your opponents’ invention cards in hand.

And some even manipulate the minions on the board.

Sometimes you’ll have more than one player inventing on a turn and that’s okay. The numbers in the bottom right hand corner function as a timer: the lower the number, the sooner you can play the invention.

Timing can be important as some inventions target players’ hands and/or money. If you have a high numbered invention, you may no longer have the invention card in hand or have the money to build the invention after other players with lower timers construct their inventions.

Oh, there is one last thing. There are larger cards called plot twists. They affect the game in unpredictable ways. We get quite a few of them in Nefarious and this changes up the gameplay.

I love Nefarious’s theme and its plot twist cards, even though the plot twists can be brutal. Some twists can speed up the game—awesome—while others slow the game to a crawl—not-so-awesome.

Overall, Nefarious is a fun and fast game but I can see why a lot of critics rated it low during its first release. Nefarious comes in a large box for what is essentially a filler game, a short game that passes the time and cleanses ones palette between larger games. What’s worse is that the not-so-awesome plot twists can punish players too much and slow down the gameplay until Nefarious takes up as much time as a game with more meat.

Nefarious’s designer Donald X. Vaccarino, who also designed Dominion, isn’t known for very deep and long games, and Nefarious is no different. Many gamers wanted more of a departure for Vaccarino; they wanted more complexity. But Nefarious does have plenty of replayability and a different flavor than Dominion. Nefarious’s negative reviews may have been a case of an overhyped game rather than a poor game.

When it first came out, Nefarious received moderate play and sales. Now that the new has worn off, Nefarious has returned for a second printing and some gamers are finding out that it was a better game than they had originally thought.

It’s not ground-breaking like many had hoped, but Nefarious is a solid filler game that if you were to purchase it, you’d get plenty of plays and enjoyment out of it. Plus, how great is it to command your own minions?