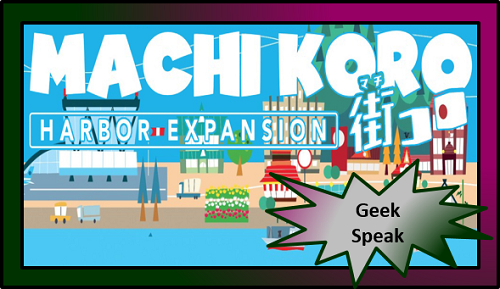 Once again you’re the mayor of Machi Koro and your city’s taking to the seas with this expansion. Can you build an economic powerhouse?

Who doesn’t like to make money? I know I do but I like talking about a game’s specifics even more. Let’s cover some of Machi Koro: Harbor’s technical stuff before getting back into the game’s flow and review. 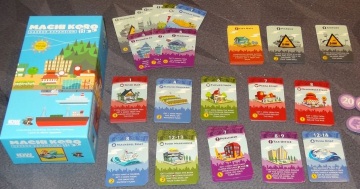 We’ve covered the base Machi Koro game earlier, so we won’t go into detail about Machi Koro: Harbor Expansion’s gameplay. If you missed our Machi Koro review, here’s a link.

In short, each player rolls the die (or dice) at the beginning of their turn. The die rolls, and when the numbers are rolled, affect which buildings produce money. Buildings are represented by cards and players can purchase new cards with their money but it’s the player who finishes all of their landmark cards (a group of cards each player begins the game with) first who wins the game. 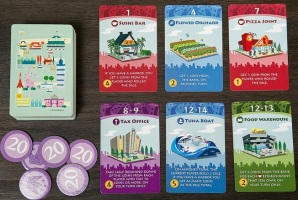 Machi Koro: Harbor adds another three landmarks, making the game run a little longer for the folks who thought the base game was a little short, and the abilities these landmarks grant add new wrinkles to Machi Koro’s strategy.

I love the Machi Koro: Harbor Expansion but the same could be said about the base game when it first came out. I liked the Machi Koro base game a lot but after a while the playing experience felt canned. Don’t get me wrong, I still play the base game, especially with newbies, but after about five plays, people figure out which strategies work and the games begin to overlap. Machi Koro: Harbor’s addition of a variable market adds some much needed variety. 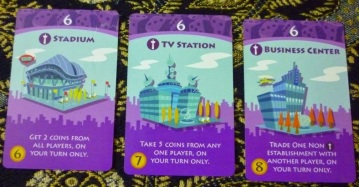 Sure, luck plays a larger role in Machi Koro: Harbor than it did in the base game but I don’t mind a slightly larger injection of luck into the game because building a good moneymaking engine is still the game’s core mechanism.

And yet I can’t ignore the increased role luck plays with Machi Koro: Harbor. I’ve played plenty of games with the Harbor Expansion and while most games have a balanced feel to them, there are some games where red buildings (buildings that allow you to steal money from other players) are too plentiful. Those few games took forever. You don’t get very far when players don’t generate money from the bank and merely swap coins between each other for five or ten minutes. Games like these are few and far between but they do happen and when they do, it’s usually after you played three or four games prior to that one and you curse yourself for not quitting while you were ahead.

Despite these occasional problem child games, if you enjoyed Machi Koro’s base game, you should pick up the Machi Koro: Harbor Expansion. The focus on fishing—it is a Harbor Expansion after all—reminds you of Machi Koro’s Japanese roots and the new ways in which you collect money is fast and enjoyable.