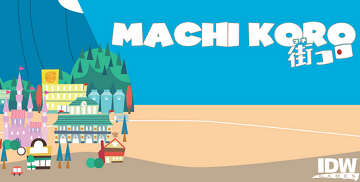 Game flow:
You’re the mayor of Machi Koro, and you’ll have to meet the demands of your citizens. You can build cheese factories, restaurants, radio towers, or even a theme park. This proves difficult as you only start the game with a wheat field, a bakery and a single die.

Machi Koro marries card drafting with a bit of deck/pool building. I found it difficult to classify the game as either of these mechanics, but card drafting fits a little better. You begin the game with the aforementioned cards and a die, but all players are given a catalog of cards with which to purchase—this is where the deck/pool building mechanic comes into play, but any similarities to deck building end there. Your goal is to be the first to build four major town features: a train station, a shopping mall, an amusement park, and a radio station.

Gameplay is simple. Similar to Settlers of Catan each player rolls at the beginning of their turn, and then you react to whatever was rolled on the die. Only town features that share a number with what was rolled activate on a turn. For example, Wheat Fields give you one coin from the bank whenever a 1 is rolled by any player, but Bakeries net you one coin from the bank when you roll a 2 or 3 on your turn only. You can buy a new feature with the coins you earn. Each feature card has a coin in the lower left-hand corner with a number in it.

You may want to start by building the train station. It allows you to roll one or two dice in a turn, and you can tell that some numbers—like 9 or 10—are impossible to roll on one six-sided die. But you could stick with the dinky features and nickel and dime your opponents.

Each feature is color-coded, illustrating how each card works. Blue features work on anyone’s turn. You only collect money from green features when you roll the number indicated on your turn. Red features only work on your opponents’ turn, and you don’t collect coin from the bank, you steal coin from your opponents. Purple features have special abilities that can boost your other features, swap features with your opponents, or even steal a feature outright.

Machi Koro’s gameplay is fast and furious. I put thirty minutes as the play time, but most games don’t take nearly that long. And as I mentioned before, Machi Koro has plenty of strategic elements. What works in one game, may not work in another. One of the issues with Settlers of Catan and other strategy games is that they take a long time to set up and play. Machi Koro does a nice job of condensing a top-notch strategy game into a short window of time. The $20 price tag doesn’t hurt either.