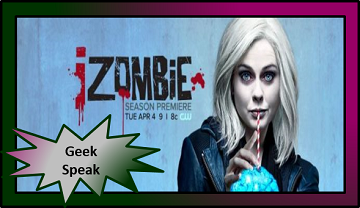 I got into iZombie because of its genre blending: murder mystery, zombies, comedy, and police procedural. I’d rate the four facets in that order. Last season was fantastic in terms of pacing and an un-CW lack of a romantic focal point. Season three started with some speed bumps, but “Dirt Nap Time” continues this season’s upward trend.

The weekly mystery (the main source for the police procedural side of things) has yet to click, Liv gets a vision that solves the investigation and little detective work is needed, but the ongoing plots of humans finding out about zombies and the zombie cure works—for the most part. I still don’t like how zombie existence was first uncovered: discarded brain paste tubes. People will get suspicious when they find a used brain tube in someone’s trash. The continuance of this storyline has worked out a lot better.

In fact, humans investigating the existence of zombies serves as another mystery layer. “Dirt Nap Time” ended with a potential smoking gun for zombie existence. I would’ve liked iZombie to channel Columbo and play up the investigation with the audience knowing the solution but not knowing how the detective(s) will solve the mystery. Still, it played out well enough.

The zombie cure thief remains a mystery and that’s a great thing. There are plenty of suspects: Blaine (he can’t be ruled out completely), Blaine’s dad (Donnie doesn’t know anything but his boss might), and the Zombietopia (who else would not want a cure for zombieism on the open market?). This long play could sustain iZombie to the season finale or beyond.

I’m not sure I buy into Major’s desire to stay with the Zombietopia. It makes sense that he wouldn’t have many options as a suspected serial killer, but Major ended up in three or four situations where he could’ve been found out as a human. He won’t, and shouldn’t, be able to keep up this charade. It’s a little fun guessing when that’ll happen but it’s too convenient from a plot standpoint for him to dodge detection. Like I said, there were three to four situations in thirty minutes where he could’ve, and probably should’ve, been unmasked and something or someone was in the right place at the right time.

The elementary school teacher brains Liv was on this week provided some laughs and a nice bend to Liv’s base personality. The brain influences Liv experience each week work best when they serve to nudge her in a direction. They don’t work when they take over her personality. Was Liv over-the-top a few times? Yes. Was she completely out of character? There’s an argument for no and this may be the first time that can be said this season. iZombie has descended into Liv’s meals as deus ex machina, laugh factories, or both. “Dirt Nap Time” could be accused of this too, but at least it isn’t as blatant.

iZombie still has plenty of rough patches but it continues to be one of the more watchable shows on the CW. “Dirt Nap Time” did enough to hold my interest.