She may not have as extensive a rogues gallery as Batman, but the first lady of superheroes has some interesting villains of her own. The Wonder Woman feature film’s out today so let’s celebrate with our list of the Amazon Princess’s greatest villains.

Okay. He’s got a goofy name and an even stranger appearance but Doctor Psycho has developed into one of Wonder Woman’s best enemies. He wants to control Diana Prince and for that Doctor Psycho may be the quintessential Wonder Woman villain. She combats stereotypes. She vows she won’t be dominated by any man—or woman for that matter—and Doctor Psycho yearns for Wonder Woman at his heel. He’s pretty much an allegory for misogyny and chauvinism. Or perhaps its physical manifestation. Maybe that’s why he’s a small man.

This one may be a bit of a cheat. Maxwell Lord is a Wonder Woman villain, he’s gone toe to toe with her countless times, but his influence extends beyond just her. At one point Maxwell Lord reinstated the Justice League with new members and waited years to hatch his plan for world domination. Talk about a long con. He’s a manipulative bastard and a perfect complement to Wonder Woman’s lasso of truth. Wonder Woman didn’t catch Lord’s elaborate lies until it was too late. Maxwell Lord would make a good villain in a future Wonder Woman film. 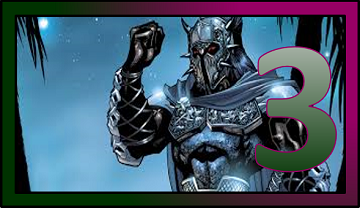 Ah, we finally get to the villain of the first Wonder Woman movie: Ares. No one should question his power. Ares is a god. He certainly has more than enough power to take on the Amazonian princess. He also has personal reasons to target her. His and Diana’s relationship has changed with each iteration of Wonder Woman. Sometimes Ares is shunned by the Amazons, forced to impose his will on the world of man. Other times he’s an uneasy ally. Regardless, he has personal ties to the character (he’s her uncle). One of my favorite Ares stories comes from Brian Azzarello’s New 52 run when Diana must take Ares’s place in Olympus. No matter what the story, Ares is usually a compelling foil.

Circe is to Wonder Woman what Black Mask is to Batman. She’s Diana’s dark negative. While Wonder Woman defends her sisters while trying to understand the world of man, Circe wants to sow distrust and watch the whole thing burn. Both are princesses of the ancient world. Both have ties to Greek gods. (Wonder Woman is one of Zeus’s many children and Hecate uses Circe as her revenge against the gods.) Both have reasons to distrust man. But Wonder Woman can overcome her distrust and foster understanding. Circe refuses. She’s formidable. Occasionally, she tries to coax Diana to her way of thinking. The fact that she may have a point at times makes her another great villain.  But she’s not Wonder Woman’s number one.

Barbara Ann Minerva (Cheetah) and Diana Prince have a long, complicated history. Barbara is an anthropologist who wanted—in most DC realities—proof of the Amazonians’ existence so she’s thrilled when she befriends Diana. Wonder Woman is living proof Amazons not only existed, they continue to thrive. But usually, Barbara’s curiosity (of wanting to find Wonder Woman’s home Themyscira) gets the better of her and she suffers the curse of the god Urzkartaga who transforms her into a half-woman, half-cheetah being with superhuman powers. Of course, the story changes from one reality to another but this is the main gist. The two faceoff a lot and their former friendship often colors their battles. These confrontations tend to get personal.

There were several villains who didn’t make the list. Giganta just missed it. I disqualified The First Born from Azzarello’s run because I haven’t seen him in any other Wonder Woman story arc but the one he was in was amazing. Seriously, you should try the New 52 Wonder Woman trades volumes 1-6. You won’t be disappointed.

Did we get the list right, for the most part? Let us know in the comments. Thanks for reading.