Jim walked into the Geekly office, and it looks like he has a new 3 Lists of 3. You have the floor, man.

Who thinks it’s time for a 3 Lists of 3 on Star Trek? No one? Well, we’re doing one anyway. Firs thing I should admit is that Star Trek Discovery isn’t even up for consideration here, because I haven’t watched it. I don’t want to support that business model of endless streaming services, and also I’m cheap. Without further stalling for word count, here are the three best episodes of the three best series in all of Trek-dom. 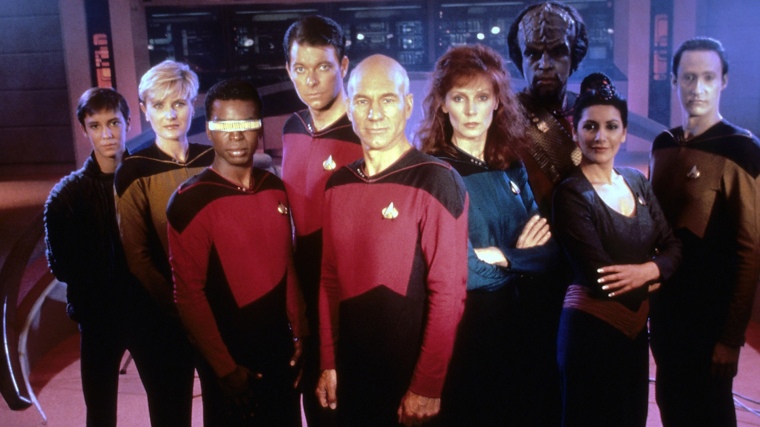 Star Trek: The Next Generation

I said it, so fight me. I’m a TNG guy. You think you’re mad now? Keep reading. The Original Series isn’t even #2 on my list. Here are the three best episodes of The Next Generation.

The Best of Both Worlds

Okay. This is a cheat, since it’s a two-parter, but I’m going to count it. This/these episode(s) saw Captain Picard assimilated by The Borg and turned against the Federation .The experience changes Picard, and also feeds into a couple other crucial plot points in Star Trek lore.

Now I’m doubling down on two-parters. Hey, the series did this quite a bit, and more often than not, when they did it, they did it for a good reason. This story is another great bit of character development for Picard as he’s tortured in the captivity of the Cardassians. You may have seen the gif of a traumatized Patrick Stewart shouting, “There are four lights!” This is from this episode. It addresses the psychology, efficacy, and morality of torture, and also puts Deanna Troi in a proper Starfleet uniform, so there’s that.

The Measure of a Man

Starfleet decides to study Data and orders him to submit  trial is held to determine if Data is a living being, and has the right to refuse. It’s Star Trek at its best, an examination of philosophy and ethics applied to characters we love.

Did you think I was bluffing about the TOS not being #2? Well, I wasn’t. Truth be told, ask me to do this list again tomorrow and I might put DS9 ahead of TNG. DS9 shows the Federation at war, challenging so much of the doctrine Gene Roddenberry laid out for this franchise, but doing it thoughtfully. It’s not just great Trek, it’s great storytelling.

In the Pale Moonlight

Remember what I said about DS9 complicating the morality of the franchise? No episode in all of Star Trek does this better. It also features Garak, one of the most complex and interesting supporting characters the franchise has ever seen. Here, Captain Sisko manipulates the Romulans to get them to enter the war on the side of the Federation. We’ve seen Starfleet officers compromise their ethics before, but these are depicted as traitors to the uniform, or at best, men who’ve lost their way. This episode makes no such judgment, and it’s truly refreshing.

This episode shows us a side of Starfleet we haven’t seen often. Sure, we’ve seen ships explode, and even some shootouts on the ground, but this episode depicts a long, ugly battle in the trenches. Here we see the cost of the Dominion War in action, and it’s made personal when Nog is wounded in combat. This is also an important episode for adding depth to the Ferengi, who have too often been given the one dimensional alien monoculture treatment.

Kira was a great second in command in this series. She’s smart, capable, and continues this series’ legacy of complicating moral questions. In this episode, we get glimpses into Kira’s past as a member of the Bajoran resistance, as well as her experiences under Cardassian occupation. Here we see her come face to face with a man she remembers as the commandant of an infamous forced labor camp. Her relationship with Sisko is challenged, as is her willingness to operate under Federation protocol.

Okay, so The Original Series does make the list. It has to, really. Without the original, nothing that came after would have been possible, and that’s a debt always owed to what came first. This show had plenty of misfires, but also some truly classic moments.

Star Trek was, like all art, a product of its time. In this case, the cold war left its mark in an exceptionally clear manner. We have the neutral zone enforcing a delicate peace, and two groups who can’t even see one another prepared to destroy one another. It parallels the story of the film, The Enemy Below, and gave us the famous Trek quote, “…I might have called you friend.”

This episode explores the history of The Eugenics War, a critical point in the fictionalized version of Earth’s past within the Star Trek universe. It addresses the consequences of genetic engineering and, most importantly, it introduces us to Khan. Without this episode, Wrath of Khan, the best of the Star Trek films, would not exist.

The City on the Edge of Forever

What I like about Star Trek is that it takes an optimistic look at humanity’s future. Yes, things get bad. They’ll get even worse still, but someday we will get things right. That feels rare in science fiction. This episode has Kirk and Spock chasing a delirious Dr. McCoy into the past to preserve their future. There, amid rampant crime and poverty, Kirk meets a woman who is an almost insufferable optimist. She predicts eventual harmony and prosperity for mankind. In short, this episode functions as a sort of metafictional look at itself, at the sort of hopeful person who creates a better future by believing in it.

There you have it. There’s Jim’s take on the three best episodes of the three best series in Star Trek history. Do you disagree? Throw on a red shirt and we’ll fight about it.