Have you ever been roped into a bad board game like Monopoly? Well, your uncle Geekly may have some auction and bidding tabletop games that don’t cost as many hours or friendships as the Hasbro giant. These games introduce new gamers to the idea of getting properties or items for the best price and in some cases, selling them for more money. Who doesn’t like to make money-money, make money-money? 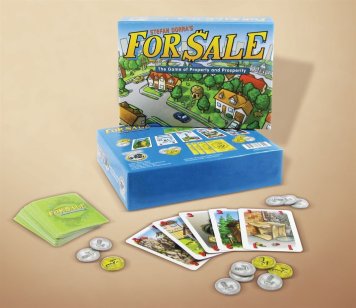 For Sale is the first game that came to my mind when thinking of an easy to get into auction and bidding game. Gameplay is broken into two phases. During the first phase, players bid money on properties (each player begins with the same amount of money; it’s all about how one uses one’s money). The second phase shifts to players selling the properties they acquired in the first phase.

It’s fast—really fast for an auction/bidding game. For Sale teaches the value of buying low and selling high. It doesn’t always boil down to who bought the best property (the properties range from manors to a cardboard box); one must know when to reach for the high value properties and when not to. It’s a great teaching tool for more complicated games that include auctions and bidding, and the concept of requiring players to outbid other players—not just match a bid—got its start with For Sale.

Prior to this game, one player could bid five coins for something and everyone around the table would have the chance to match it, and the last jerk at the table would. Then you’d have another slow round of bids for six coins. It took forever. Ugh!

Thank you, For Sale. 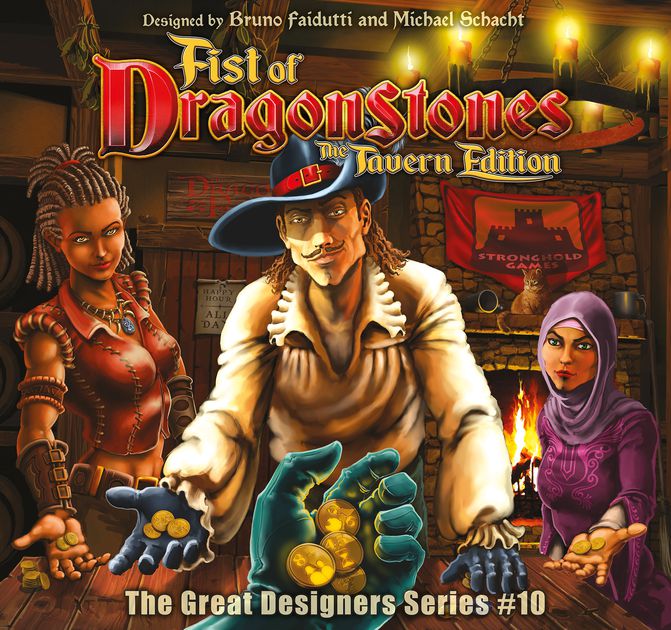 Players bid on character cards (with abilities) by using a closed fist method. No. You’re not allowed to punch someone; you’re just holding out a closed fist, hiding your bid.

Players hide their total money (split between regular gold and fairy gold, which is magical) behind a player shield (a piece of cardboard) and when an auction occurs, every player takes the bid they plan to make (regular gold, fairy gold, or a combination of the two), holds their bid in their closed fist and reveal their bids at the same time. The highest bidder wins the auction, and any money used—whether the player won or lost the bid—is returned to the bank. 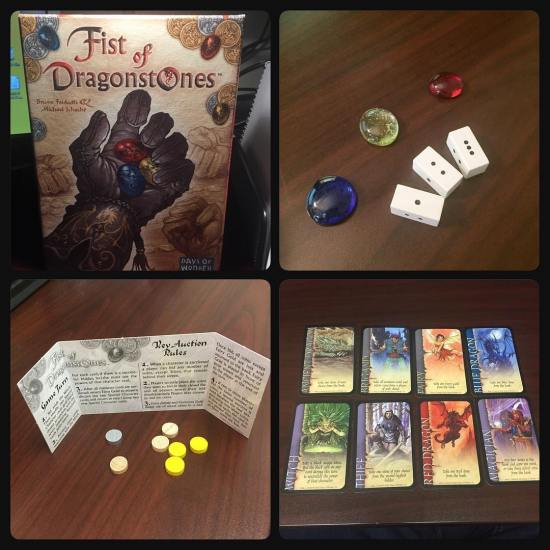 Each character (the cards players are bidding on) has an ability that can help obtain more money or victory points. The first player to 4 victory points, wins.

The various character cards add replay value, and I don’t know of a single auction/bidding game that uses a fantasy theme. Maybe I should make Dragon Tycoon.

The inclusion of a closed fist bidding system is a great choice. Fist of Dragonstones uses the mechanism well and this a common game mechanism used in other tabletop games of various types—not just games that are predominantly auction or bidding.

There’s a reason this game put the juggernaut game publisher Days of Wonder on the map, and I hear it’s getting a reprint this year (2018). Bonus! 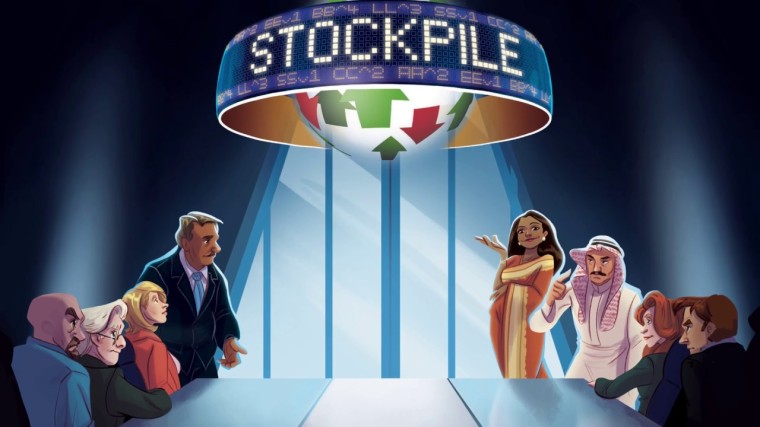 Ever wanted to play the stock market? Stockpile puts players in the shoes of a wolf of Wall Street. Well, maybe not, but the game does a good job of giving each player hidden information (about 1 of the game’s 6 stocks) that the other players don’t have to make decisions on whether to buy or sell a stock.

If a stock is about to plummet, ditch it into one of the stockpiles that players bid for during the round. Each player must place one stock face up in one of the stockpiles and one face down. Since there is one stock that is global knowledge (one of the risers and fallers for the round is known to all players), sneaky devils may want to put a stock of that type, face down so other players won’t know it’s there. 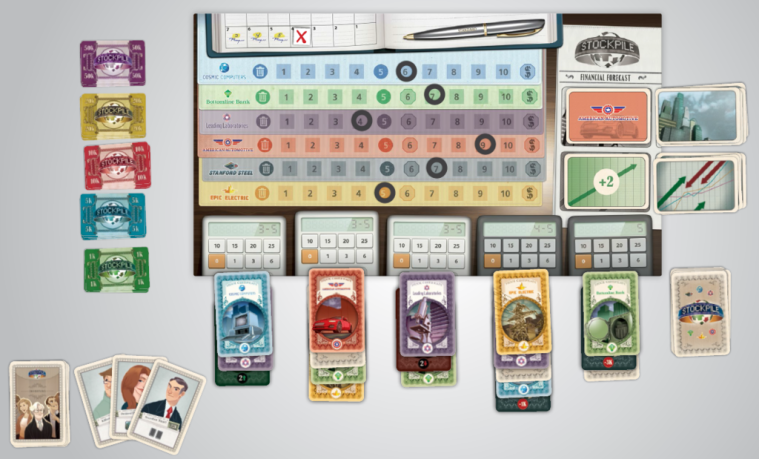 Stockpile’s bidding system is unique from the rest of the games on this list as each stockpile has a corresponding calculator card above it. The numbers (0, 1, 3, 6, 10, 15, 20, 25) on the calculator buttons represent the bids (in thousands) a player can make, and players take turns placing their markers on an available number on one of the calculators. Players can outbid—but not match—a previous bid. If they do, the owner of the lower bid collects their marker and can bid again. As soon as all players have placed their markers, they collect all the cards in the stockpile that their marker is on.

The bidding in Stockpile doesn’t take that long as there are only eight possible bids one can make for each stockpile during a round. New gamers will see this style of bidding in a lot of games like Cyclades. Due to the streamlined bidding, Stockpile gets players involved with trying to predict stocks that will rise or fall over the course of the game.

Stockpile is great for commodity speculation, but it’s also one that I’ve seen an 8-year-old play and enjoy.

These games beat the pants off Monopoly. For Sale, Fist of Dragonstones, and Stockpile serve as great entry-level games with some solid replay value. Just make sure you don’t lose your pants in a shady business deal.

Know of any other great beginner auction and bidding games? Let us know in the comments.