I’m still trying to figure out when I should post Geekly’s Free Video Game Summer. It’s been a little over a week, but I haven’t forgotten about you guys. This week I’ve played a lot of smaller games that seem to have a similar theme: run and survive.

Okay. I’m starting with the one game on this list that doesn’t have a survival mechanism, but Sea Hero Quest’s an interesting game. Well, it’s a simple game, but its real-world mission is interesting. Sea Hero Quest is backed by Alzheimer’s Research, and it tracks players’ progress as they perform brain cognition and memory games. The data collected from the game’s users is given to assist with a cure for Alzheimer’s and dementia.

Don’t worry. The users remain anonymous, and the data isn’t used for anything other than Alzheimer’s and dementia research. Here’s a link to their terms and conditions: http://www.seaheroquest.com/en/terms-and-conditions

If you want to learn more about how Sea Hero Quest is using its data to aid in dementia research, click on this link: http://www.seaheroquest.com/en/dementia

This game isn’t that involved, nor should it be. It has a cute story about a sailor out to sea, you play some time-waster mind games and clear levels. There isn’t too much going on with this game on the surface, but the game’s real mission of scientific research has led to over 2 million people downloading and playing Sea Hero Quest, which has in turn provided 786 decades worth of dementia research data and counting.

Sure, it’s a time-waster game, but you won’t find another time-waster that’s time well spent.

Let’s Go Run Around’s game play is exactly what you’d expect from a game entitled Let’s Go Run Around. A cape-wearing astronaut runs around the perimeter of your mobile device, and you tap your screen to make him jump over obstacles.

It’s a silly game, but the controls are solid. My only major complaint with Let’s Go Run Around is the same gripe I have for most games of this ilk: little to no saving of player progress. You’ll spin your wheels for a while before getting to a checkpoint, and it’s the pain of having to start over that coaxes players to spend money on a free app of this type. You’ve played those last five levels and you don’t want to replay them, so you spend a dollar to gain an extra life.

Dying happens a little too frequently and checkpoints happen a little too infrequently for my taste. I won’t be keeping Let’s Go Run Around in my collection, but I did enjoy it.

Let’s Go Run Around may be on the fringe of the run and survive motif, but Into the Dead hits that motif in the gut. You’re navigating a forest of zombies, slipping past them, picking up weapons, and mowing them down to clear a lane.

Similar to Stampede Rodeo, which I covered a few weeks ago, Into the Dead players are given mini-goals. They gain experience with each goal they clear and if they earn enough experience, players can unlock different game modes and power-ups. What I like the most about Into the Dead is its variety of controls. I prefer tilting my device to move and tapping to shoot my weapon, so that when I touch my screen, I know I’m firing my weapon, but players have the options of swiping or tapping for movement too. You’re sure to find a control configuration that works best for your play style.

The game itself is a zombie, 3D version of Pac-Man. I like Pac-Man a lot—this won’t be the last time we’ll see Pac-Man on this list—but the formula loses something by switching from third person to first. By doing this Into the Dead cranks up the tension the first few times you play it; you feel as if you are a zombie apocalypse survivor. As you grow accustomed to dying—and you will die a lot, just like Pac-Man—death means less and the tension wanes as you respawn. When you no longer have that tension, you’re left with no one to root for. You don’t have a cuddly yellow buddy.

Into the Dead is a solid game. It’s worth a trial run, but I’m not sure it stays in my permanent collection.

These next two games are similar in play style. You control a constantly rolling ball in Rolling Sky. You’re tasked with moving the ball around or through obstacles that also move in and out of play. As soon as you fall off—from a surface that disappears suddenly—or the ball pops—from a spike that appears just as quickly as disappearing surfaces—you must start over from the last checkpoint you crossed.

If I didn’t like the pain of losing progress through the rare nature of checkpoints in Let’s Go Run Around, you can guess what I think about the frustration generated through the scarcity of checkpoints in Rolling Sky. I don’t like this business model. Yes. These games need to make money for their developers, but some free-to-play game developers are monetizing pain and frustration, and it’s not a good look.

Game play wise Rolling Sky is another solid game. If you liked Marble Madness from the classic Nintendo or arcade, you’ll enjoy Rolling Sky. But be prepared to play the same levels. 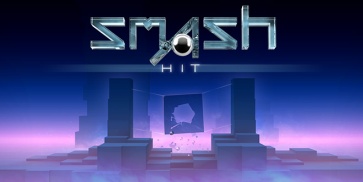 You can even fire a marble at an occasional ice stalagmite or stalactite and gain additional marbles. I like the design of Smash Hit’s levels and its simmer of frustration. It’d be the perfect free-to-play game on this list if it wasn’t for the fact that it’s more of a free demo than a free-to-play game. You can only start from the last checkpoint you crossed if you pay $2 for the game’s full-version. Two bucks isn’t a lot, but darn you, Smash Hit. Why did you show up as a free-to-play game? Next.

As I said before I like Pac-Man a lot, and Pac-Man 256 is a very good, modern, free-to-play variant of the game. Pac-Man 256 is a 3D version of the classic. You move through an endless maze, with older portions of the maze cut off from you because of a new ghost named Glitchy, who looks like a gaming glitch, eating up the old maze. The original ghosts are in this game too, and Pac-Man 256 does a great job of capturing their personalities/nicknames—that’d be the ghost personalities as they were better described in Japanese—and some of their personalities are enhanced from the original.

Blinky (the red ghost or “chaser” in Japan) continues to chase you until you can shake him. Pinky (the pink ghost or “ambusher” in Japan) sits at a crossroad and ambushes you if you get in his line-of-sight. Inky (the blue ghost or “whimsical” in Japan) tries to anticipate where you’re headed and runs toward four pixels ahead of where you are—or something similar to that. And you can still play a game of chicken with Clyde (the orange ghost or “feigning ignorance” in Japan) who either tries to catch up to Blinky if he’s far from you or makes a bee-line for the bottom left corner of the maze, which is effective when you consider that you’re forced to move up (because of Glitchy eating the maze), while Clyde’s moving down. Yeah, I’m a bit of a Pac-Man fan.

The odd thing in Pac-Man 256 is that Pac-Man takes on an aspect of the original Blinky’s “Cruiser Elroy” mode. In the original, Blinky would speed up when so many pellets were left on the board and in Pac-Man 256, Pac-Man speeds up with each consecutive pellet he eats. Another deviation from the original is that some portions of the maze won’t have a pellet and that forces players to make a quick decision of which route they should take. Is the speed boost worth getting caught? It’s an interesting twist to the original.

Of course there are power-ups in this game. You still have the super pellet, which turns all ghosts dark blue and allows you to eat them, but Pac-Man 256 adds stealth, giant-sized Pac-Man, bombs, tornadoes, and several other manner of quirky super powers. You can upgrade these power-ups and the time it takes to upgrade them—you can’t use a power-up while it’s upgrading—tempts players to spend real-life money to speed up the process, but the real money maker is the game’s original Pac-Man skin.

Pac-Man 256’s base game adds a blocky, pixelated art to the original. It’s pleasant and close enough to the original look, but if you want a more authentic look, you’ll have to pay a dollar. That’s not a lot of money for an upgrade, but Pac-Man 256 should’ve included the original game’s look in the base game. There are plenty of other purchasable skins for the game (like a Lego version, Pac-Man in an office, and a Tron inspired board) that the original Pac-Man look as an in-game purchase reads like a cheap money grab. It’s a small amount of money, but it’s still a money grab.

My only other minor complaint would be that the touch controls were not as responsive as I’d like them to be. Most of the time when Pac-Man died it was my fault, but once every nine or ten deaths, the game wouldn’t respond. That’s not bad, but one could get frustrated.

Overall, Pac-Man 256 is a great game. I’ve had a copy or version of Pac-Man on most of the computers or devices I’ve ever owned. There are other versions of Pac-Man available for this generation of devices, but Pac-Man 256 is a fun one and it’s staying in my collection.

That wraps up another week of free-to-play games. Until next we meet, thanks for reading.