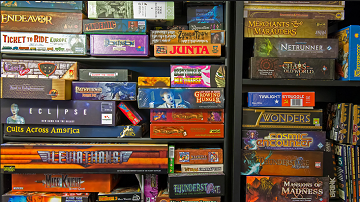 We stay connected more than ever through the internet and smart phones and other smart gadgets, but we have lost touch with people. Tabletop games are a fun and educational way to get back to human interaction and discovery.

With tabletop games you have to be with the people seated around the table in both body and mind or else you’ll miss an important play or cannonball your team’s chances of meeting their goal. Try texting someone while playing a game of Hanabi. This cooperative game will not go well, and the fact that Hanabi is a cooperative game means that it builds teamwork and allows you to problem solve, fostering cognitive development. Okay. You learn as you play and have fun as a group. And recently, people have found plenty of tabletop games to gather around and play in groups.

We’ve had a smorgasbord of fantastic tabletop games of all shapes and sizes in the past twenty years or so, beginning with Magic: The Gathering (the first collectible card game) and Settlers of Catan (the game that put German or designer games on the map), and we get introduced to an exciting and different game mechanic every few years: the living card game, the variable player power/ability in Hero Clix for miniatures enthusiasts, deck/pool building, and worker placement to name a few. If you don’t care for one game mechanic, you’re sure to find one that suits you. Heck, there’s probably someone working on your new favorite game mechanic right now. But each one of these games trains their players in certain skills.

You have to know or learn algebra for collectible card games—for example: your strength is equal to X, where X is the number of creatures you control times two (and this is a very simple example)—while you tune your mind toward strategy with most designer games, and even manage resources whether those resources are wood, clay, and wheat or they’re soldiers, workers, and time. You can even learn history with tabletop games. Bryce Journey, an Omaha game designer, created Aguirre, a game about the most insane Spanish conquistador who murdered most of his crew looking for the Lost Cities of Gold. You play as one of Aguirre’s crew and try to survive the expedition that’s steeped in historical accuracy. You can learn just about anything with tabletop games and learn more about the people you’re sitting with at the table.

When you play tabletop games, you find out real quick what kind of player someone is and how their mind works. I played a game of Ticket to Ride with my Uncle Paul, and he gobbled up the Eastern seaboard with his trains. Everyone at the table questioned whether or not Uncle Paul even had a ticket for the East Coast. We all thought he just wanted to block everyone else from getting a route, and sure enough when the game ended, Uncle Paul revealed his tickets and the closest ticket he had to the East Coast was Houston to Kansas City. And that was with a designer game with no bidding or bartering.

If you add bidding or bartering to any game, you get plenty of people batting their eyes at other people, asking them pretty please or they start offering real-life favors—like washing dishes for a week, not that other things aren’t offered—for help in a game. All of this is done in good fun, and that’s the main reason why I like tabletop games. They’re fun.