Folks have made superhero games for decades, but the past few years have had an explosion of men and women in tights contained in little boxes. Just about every major game publisher has some form of superhero offering, so it’s going to be tough picking this list. Before we get started, let’s cover a few games that didn’t quite make the cut.

Richard Borg’s X-Men: Under Siege was a fantastic game. It nailed the theme, and I spent several hours and days playing it, but other games have trumped it due to its lengthy setup and light strategy. Marvel: Overpower is another game that just missed the list. It had solid mechanics, but these same mechanics proved too simplistic. The third near miss would have been an interesting entry, Batman: Gotham City Strategy Game. This games puts you in control of a Batman villain and you have to take over Gotham City’s underworld. It doesn’t quite fit the superhero theme, so that works against it, and you don’t really tango with the Caped Crusader, so that keeps it off the list, too. Still, you should check it out if you can find it.

And now for the superhero themed games that did make the list.

5) Marvel Heroes (2006)
Marvel Heroes is a pretty game. It has gorgeous miniatures made from the high-quality plastic that doesn’t melt in the box. And these miniatures are of four Marvel superhero teams, consisting of four superheroes, but beware, each team has its own nemesis.

The base game plays just like you’re conducting daily patrols of Marvel’s New York City. I admit the game board, depicting NYC, is blah, and it has to be the least color-blind friendly board on the market. Each region of NYC is color-coded, using the same symbols to denote smaller areas you can travel to within the region. If you’re not familiar with NYC and you’re color-blind, you’ll spend the entire two to three hours hunting and pecking for where you should place your minis. 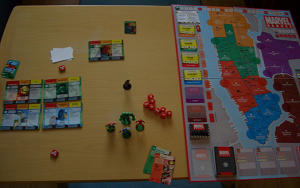 Still, Marvel Heroes institutes a fine combat system that accomplishes the rare feat of using equal levels simplicity and complexity. You use combat dice, but before dice are rolled, you and your opponent choose which attack you want to use. You’re given three possible attacks and each one has its own pros and cons. I wish more games used this type of system. It feels like you control the flow of combat without getting too involved with the nitty gritty.

Marvel Heroes smells like roses, and it would be higher on our list, but two issues prevent it from doing so: light on theme and the four nemeses. On the surface, Marvel Heroes looks like it nails the superhero theme. But remember when I said that it feels like you’re conducting daily patrols? You could strip away the superhero theme and slap on an NYPD theme, and I think the game would still work. Then, there’s a game element that allows you to avoid your nemesis. That’s like having a Thor movie with no Tom Hiddleston as Loki.

4) Heroclix (2002)
Our previous entry had twenty miniatures, while Heroclix has hundreds of thousands of them. Volume alone demands that Heroclix has to be on this list. You can pit DC Comics versus Marvel Comics or even go for the smaller, independent press comic book characters like Hellboy.

I won’t lie. Heroclix gets expensive, and the collective aspect of the game means that you can buy a pack of miniatures and not get the ones you want, but the powers match their comic book counterparts – for the most part – and you don’t need every mini in order to play the game. You’ll just run the risk of wanting more miniatures to complete your ever-growing collection.

3) Marvel Dice Masters (2014)
Marvel Dice Masters combines Magic: the Gathering with Quarriors! to great effect. Heroes do tend to attack each other (which can happen in comics but not at the rate this game suggests), power swapping does occur (I didn’t know Jubilee could lift a car and throw it), and some of the hero powers are a little out of place, but you can’t deny Marvel Dice Masters’ appeal.

Like Heroclix before it on this list, Marvel Dice Masters has a collectable aspect to it, but the price point is so low ($0.99) that it doesn’t hurt to collect some of the dice, and unlike Heroclix, you’ll be able to use all the dice you get in the pack, so you don’t feel like you’re wasting as much of your money. I hope a lot of other collectable games switch to this tactic.

And the game itself is solid. Yes, it’s an amalgam of Magic and Quarriors!, but it adds enough new elements to the gameplay that it doesn’t feel like a copy of either game. Since Quarriors! is a pool building game, you may not be able to grab all the dice you want. Marvel Dice Masters allows you to cast the heroes you want and craft a winning strategy in advance of chucking dice.

While heroes can fight each other, most of the time they face villains. Marvel: Legendary captures this aspect better than any other deck or pool building game that uses a superhero theme. It’s not perfect of course. You’ll play games where Spider-man has Wolverine’s claws or Professor X has super strength and flight, but cooperative play adds an element missing from so many of other deck building games in general and a game element that needs to be there for a superhero-themed tabletop game. 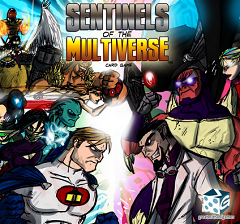 Superheroes work together on a team. Check. They fight supervillains. Check. The backdrop is colorful and fitting for a comic book series. Check. I won’t say that Sentinels of the Multiverse is perfect. It does have its issues. There’s a power balancing issue. Some games can last ten or fifteen minutes. Others can take up to two or three hours. That’s not a good thing when you schedule a game night. I’m always playing two or three short games, and then the two hour game rears its ugly head, but I enjoy playing the game. It’s fun.

Sentinels of the Multiverse Overview

Every time I play Sentinels of the Multiverse, I feel like I’m a superhero and that my every action can mean life or death for the people I’m trying to protect. Isn’t that the whole purpose of a superhero themed game?

Did we get the list right? Let us know how we did and feel free to give us more ideas for future Top Fives.