Oh, Flash. You may not be able to mention Batman or Superman but this was a not-so-subtle nod to a former Ferris Air test pilot, Hal Jordan a.k.a. Green Lantern. But that must have been one heck of a road trip for the Flash gang. They traveled from Central City to Coast City in order to make it to Ferris Air (here’s our map of the DC Comics Universe Cities). Yikes!

That’s a Lot of Blue…

Okay, Eddie Thawne isn’t a part of the DCU but his family’s everywhere. Then I wonder about Eddie’s choice in clothing. He wears a lot of blue. Could Eddie be the comics’ modern-day ancestor of Eobard Thawne, Malcolm? Malcolm Thawne is the alter ego of Cobalt Blue and Rick Cosnett (Eddie in The Flash) does look good in blue.

One Good Pun Deserves Another

Leave it to Miller’s Captain Cold to drop lines like “Freeze,” while holding a cold gun. He’s also a “Jukebox Hero” for feeding enough quarters so Foreigner’s “Cold as Ice” would be playing while Barry asked for his help. I see what you did there, Flash.

We get a couple of name drops from Arrow in this week’s Flash. Oliver’s island gets a mention as well as his League of Assassins’ HQ. I wonder what Nyssa’s doing on her wedding night, while Ollie steps out, and apparently, Lyla Michaels doesn’t have to worry about the League of Assassins anymore. That’s a plus.

In-Fighting Among the Villains

This is a classic superhero trope. Any team of villains have trouble defeating a hero because they’re too busy fighting amongst themselves. We catch a glimpse of this in the back of the truck before the meta-humans got their powers back. We’ll have to see if Snart can bring this group together. He’s already calling them his Rogues, but he may get a little distracted when Rip Hunter asks for his help in the Arrow/Flash spin-off.

We saw the Reverse-Flash use the fabled ring in this week’s episode and that was a splendid thing.

The Satellite Era of the Justice League

Okay, it’s not likely that The CW will use the name Justice League but we’ve seen (or heard about) several members of key JL members from the Satellite Era. Green Arrow, The Flash and Firestorm played significant roles during this time and we’ve seen Ray Palmer (The Atom) and Black Canary as guest stars. 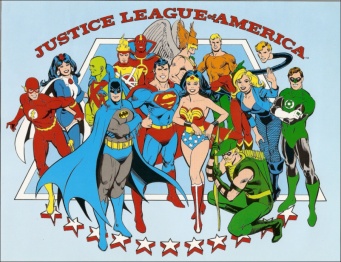 Then if you add that Green Lantern was hinted at with the Ferris Air test pilot (see above) in this episode and Hawkgirl makes a cameo in next week’s season finale, The Flash has made a reference to almost every major figure from this period of the JLA besides the big three: Batman, Superman, and Wonder Woman.

Here’s our Flash review if you missed it.