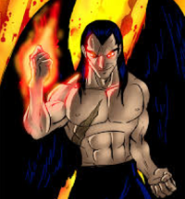 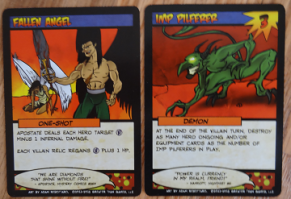 How to Defeat Apostate: You have to plan when you lower Apostate’s HP to zero or lower. He can’t have any relics in play or else he flips. In fact, he flips instead of taking the last few hit points of damage even if he’s on his second side. So, you have to take out relics. But you don’t have to worry too much about Demons.

Still, you don’t want too many Imp Pilferer’s in play because they’ll wreak havoc on your ongoing and equipment cards, and you can’t deal as much damage to Apostate if Fiendish Pugilist is in play. But Relic Spirit gets the nod for most fiendish demon because she has to stay in play—or else more relics come into play—and she heals other relics making it even more difficult to defeat Apostate.

Then there are relics. Many of them have nasty effects, but the worst of these have to be Condemnation, Tome of the Unknowable, and Runes of Malediction. The first one deals the most damage, while the other two have a nasty habit of putting more villain cards on the table. Knock these out first, and then take on the rest of the relics. After that, turn your attention to Apostate.