Deck Strength: Once it gets going Absolute Zero’s deck controls the board. Whenever villain cards deal him damage, he heals or redirects the damage to another non-hero target. As for the majority of the other cards, Absolute Zero has plenty of ways to deal consistent low cold damage with his permanent cards, and his innate power, Thermodynamics, serves as a great way to keep him in the game with a built in healing power.
Best Team Support Card: Sub-Zero Atmosphere: Any villain card which would act at the end of the villain turn instead acts at the start of the villain turn.
Best Personal Support Card: Nullpoint Calibration Unit: When Absolute Zero would take cold damage, regain that many HP instead. 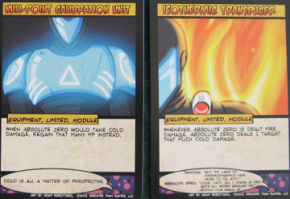 Ultimate Team-up: Absolute Zero needs help—a lot of help. Players should consider Absolute Zero as the target for most damage buffs in the game. Here’s looking at you, Legacy or even Argent Adept if he concentrates most of his buffs on Absolute Zero. Early card draw is nice to help Absolute Zero get set up, so Visionary’s a natural choice too. And The Might Ra’s an interesting choice. He boosts Absolute Zero’s damage by a ton, but Zero’s more likely to take damage himself.