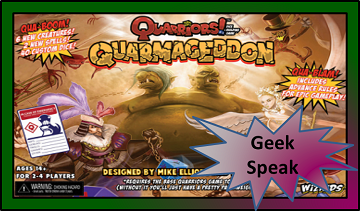 Game flow:
The first expansion to the popular dice pool building game Quarriors!. I won’t go into too much detail with the game flow, but if you want to read more about Quarriors!, here’s our review. 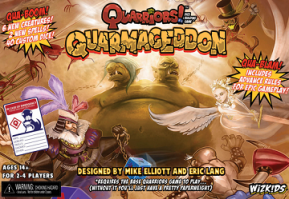 In short, players start off with a small pool of basic dice which begin the game in their dice bag. On your turn, you blindly pull six dice from your dice bag and roll the dice you pulled. Some die faces give you quiddity (currency), while others allow you to play creatures or cast spells. You score a certain amount of glory (indicated on the creature’s card) at the beginning of your turn. The first person to the glory requirement (different for how many players are playing in a game) wins.

Review:
Quarriors! Quarmageddon adds to the list of overpowered creatures from the base game, and that’s a good thing. There were far too many creatures that dominated the base game and the spells were standard issue that the game needed some fresh blood. 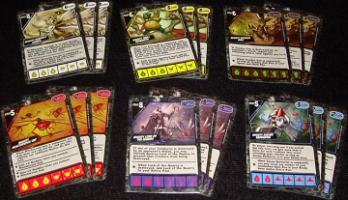 The two spells are lovely. Oblation earns you glory fast, but it usually does it at a price, while the Discriminating line of spells has some wild and wonderful effects. You can control your dice pool or even capture a new die for free. Free is always good. 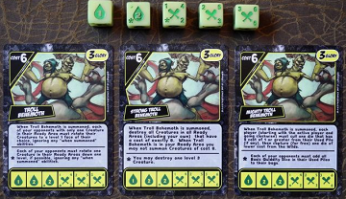 As for the creatures, you have a lot of dragon and wizard killers. The Troll can target upper level creatures and can reduce the effectiveness of your opponents’ creatures. But the Lord dice can counter the troll and other heavy hitting creatures and spells—like the death spell. The Gnome’s a nice mid-level creature, but his abilities are usually difficult to execute, while the Imp mid-level that uses the seldom used cull ability. I can see players using this to get rid of the chaff in their dice pool. However, I like the Seraph almost as much as the Troll. She feeds into the Oblation and Discriminating group of spells to double their effect. 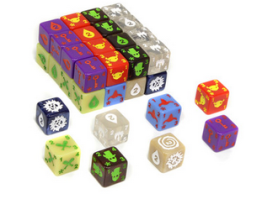 The only problem I see is that there’s a focus on upper level creatures in this set. Sure, the base game had a shortage of upper level creatures, but I would’ve liked to have seen at least one nice addition to the low-level creature pool. You can win by collecting a lot of little guys, but it looks like the creative team forgot that when adding creatures to Quarmageddon. 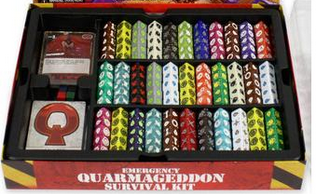 Verdict: Quarmageddon is a nice addition to the Quarriors! line overall (especially, with the new spells, the Seraph, and the Troll), but the game needs a little more variety with its low-level creatures.