One of Mr. Jack’s two players is Jack the Ripper, and he’s on the loose in Whitechapel. The second of Mr. Jack’s players is a detective tasked with tracking down Mr. Jack. Will Mr. Jack escape capture or will the long arm of the law bring him to justice?

We’ll get to the gruesome good stuff in a little bit but first, let’s cover the technical nitty gritty.

The game is set up the same way and it looks like this. 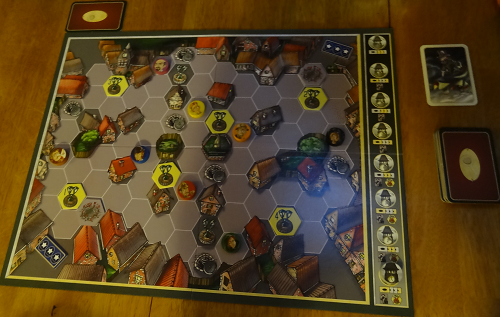 The two players sit across from each other with the detective player positioned so the board faces them. When the board is set, the player who is Mr. Jack selects a card from the alibi deck. The character depicted on this card is Mr. Jack in disguise. The Mr. Jack player puts this card aside—not showing it to the detective—and the first round begins.

After both players have made their moves (they’ll both move two suspects per round), the player who is Mr. Jack tells the detective whether or not Mr. Jack is “seen” or “unseen.” The detective can then check off any innocent suspects—by flipping over the suspect tokens which are two sided, so you can still move the suspect even after they’ve been cleared. 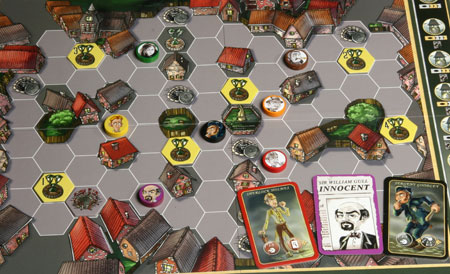 Play continues for up to eight rounds or until Mr. Jack is apprehended or escapes.

The detective must successfully deduce who the real Mr. Jack is and then move another suspect token into the same space to arrest the killer. This is the only way the detective player can win.

Mr. Jack can win in three ways: escaping Whitechapel without detection (there are four exits on the game board), the detective choosing the wrong person (Mr. Jack escapes in the mayhem that ensues), or the detective runs out of time.

I don’t know if Mr. Jack over-sensationalizes the most famous serial killer in history or not, but the gameplay is solid gold.

This game is a tasty blend of Clue and Chess with a little cat and mouse added for good measure. The production value is above reproach, and the gameplay will keep you entertained for hours. Even so, Mr. Jack has a puzzle feel to it and after a while, once you’ve grown accustomed to the suspects and their various powers—each suspect can do something unique to the board—and you’ve played with someone enough, you’ll find the puzzle easier to solve. 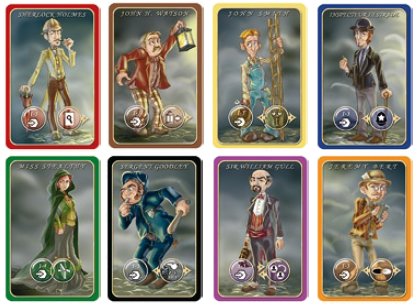 Fortunately, Hurrican has released Mr. Jack Extension, which adds more playing time, but you shouldn’t have to run out and buy it right away. Mr. Jack is a fun take on the deduction game genre and should be in most gamers’ libraries, especially if you love mysteries.

Mr. Jack is a must own for deduction game fans or someone who likes and plays a lot of two player games. Sometimes you can’t find more than one other player for game nights.