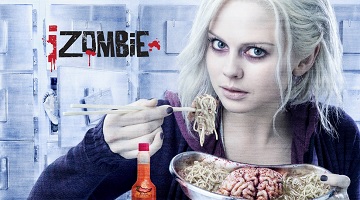 The protagonist Liv comes off as an undead Veronica Mars: acerbic and unaffected. She even narrates as she goes along. Then iZombie infuses the zombie motif and I say motif because there’s just enough of a hint of zombie so you know that she’s undead but the focus isn’t on brain eating. That may be a deal breaker for true zombie fans but I’m not so sure. At the heart of every zombie fan is the feeling that you don’t belong—werewolves are the jocks; vampires are the heartthrobs everyone wants to be with—so iZombie captures the essence of being a zombie while not showcasing the gore. But my favorite genre twist is iZombie’s inclusion of a police procedural. Even though you get plenty of the buddy cop flavor, iZombie turns the genre on its ear by having one of the partners a zombie, masquerading as a psychic.

Who knew that there could be side effects from eating brains? Liv gains the memories, proclivities and abilities of the people whose brains are in her system. She found out who killed a Jane Doe by using visions from the victim’s memory, became a kleptomaniac that also factored in pinpointing the victim, and her sudden knowledge of Romanian helped in the interrogation process. In a word, Genius.

I even like how iZombie used comic panel stills just to remind folks that this is yet another great addition to the DC Comics TV Universe. Okay, iZombie comes from a DC Comics subsidiary Vertigo but it’s still a great show.

Another wonderful DC Comics TV Universe (err…Vertigo) pilot and it makes me yearn for the CW programming shifting to non-stop DC Comics shows.

Well, as we get closer to the end of Flash’s first season, the show is doing a couple of really nice things. I like that after this week’s episode, Iris finally knows Barry’s big secret. On the one hand, it can be argued that far too many people know Flash’s identity, but Iris being clued in feels overdue. Additionally, I’m glad that there wasn’t some big moment to it. It felt like it came out because it had to, and really, it did.

The other nice thing this show is doing is raising the stakes. If last week’s episode has a big knock against it, it’s that the second Weather Wizard was underwhelming, to say the least. Dr. Wells’ big moment with Cisco did something to pick that slack up, though.

With the device of time travel introduced, it’s hard to imagine Cisco’s death being a permanent development, but I will say the scene was effective nonetheless. I think the only disappointment with Wells’ character is that because we saw him stare down the yellow suit a number of episodes ago, I wanted the truth behind his identity to be a little more complicated than it has proven to be. Still, this week’s episode provided some very real momentum for the show’s first season, and I am anticipating a strong finish.

Stop me if this sounds familiar. This week’s villain of the week didn’t do a whole lot–stop. But Harrison Wells saved the tension by giving us some great moments–stop. Yeah, those two things have happened a lot this season.

I’m also not convinced that Cisco’s death will stay permanent because of the time travel element but the same can be said of Iris knowing Barry’s secret. Anything of note in this episode occurred after Barry met his speed mirage, so if Barry changes the pattern of events, Cisco will no longer be dead, Captain Singh won’t be in the hospital, the Weather Wizard will not have gone wild in Central City yet, Harrison Wells will not have revealed his identity (I agree that it was too straight forward of any explanation anyway), and Iris won’t know that Barry’s the Flash.

The only thing that happened prior to the speed mirage is that horrible double date at the bowling alley. For all its fireworks, this episode could be null and void, except for the first and last few minutes.

An exciting show that may or may not have made progress.

Do you want more Flash? Check out our secrets page here.

Powers continued its upward swing this week with the curiously named episode “Devil in a Garbage Bag.” All heck broke loose when Wolfe ran amok in the Powers prison and all the threads that were introduced in the previous three episodes germinated in this one.

Johnny Royalle revealed the secret behind his Sway and how his actions aided in Wolfe’s escape. The great thing is that Royalle didn’t plan Wolfe’s escape as hinted at the end of last week’s episode; it was a mistake. Johnny resumed his role of misunderstood villain, while Wolfe added his name to that list.

Wolfe proved to be a Galactus type. He doesn’t mean to hurt people; he’s just hungry. He even viewed himself as a boy throughout the episode and hurt the people who had been hurting him. I loved following him through the labyrinth of a prison, trying to remember why and how he was placed there, but I’m not sure if Powers can continue this arc for another six episodes. Still, there’s plenty to work with the Walker-Wolfe angle.

Walker and Pilgrim looked like they had finally bridged the gap between awkward partners to full-fledged partners when Walker took Sway, trying to regain his lost powers. We knew it was only a matter of time before he tried something like that. Long story short: it didn’t end well for Walker. He spent most of the episode psychically linked with Wolfe—that’s how we see Wolfe’s depiction of himself as a child. We’re not sure how Walker and Royalle plan to deal with Wolfe—and that’s a good thing.

We found out how Triphammer and Retro-Girl intended to deal with Wolfe. Triphammer’s drainer took center stage, while Retro-Girl exited stage right. Sprinkle in some good airtime for Calista and Krispen and you get the most engaging episode of Powers yet.

Powers’ first season may act a lot like Arrow’s inaugural season. It started off shaky and now it may have found its legs.

Powers continues to get better week after week. Let’s hope it doesn’t peak too soon.

This week’s episode of Arrow, “The Offer,” suffers from one key plot device but there were some good, small developments. Let’s get the one major weakness out of the way first.

I didn’t buy Ra’s Al Ghul slumming it, asking Ollie to be the next Demon’s Head before the spring break (How do you go from the DC Comics icon Batman to the tertiary character Green Arrow?), and I don’t believe Ra’s trying to sabotage the Arrow’s gig in Starling City now. Arrow’s asking me to suspend disbelief a little too much. And I while think Ra’s tearing down Ollie has enough legs to propel Arrow to the end of the season, this feels like a series reboot. Captain Lance didn’t like Arrow in the first season and a half and hunted him, and now it looks like he’ll start hunting Arrow again by this season’s end. With that aside, I did like some of the other developments.

Thank you, Ollie, for cementing Roy’s crime fighting nickname. He’s officially Arsenal and there was much rejoicing. Roy had a particularly good episode as he and Thea got back together. It was only a matter of time and it felt right here. I’m not sure about Thea’s mental state—I don’t think she is either—and she needs a rock. Outside of Diggle, Roy’s the well-adjusted member of Team Arrow. But Roy and Thea are two characters I like. Let’s talk about one member of Team Arrow I wished wasn’t part of the cast.

Laurel had few lines—that’s good. She had a lot of over-the-top action sequences—that’s better. And she asked a Nyssa without a home to be her new trainer. Nyssa as Laurel’s trainer is both smart for Laurel—we don’t say that too often about her—and Arrow needed a friendly link to Ra’s. Ra’s daughter Nyssa aiding Ollie should even out Ra’s trying to damage Ollie’s reputation.

Arrow took some steps toward a solid end game, but it wasn’t the end game we wanted.