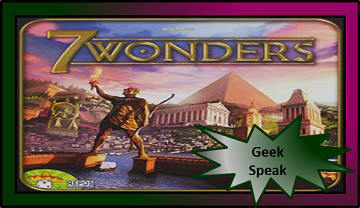 Take control of one of history’s most accomplished city/states and lead them to victory as a civilization that’ll stand the test of time. Okay, the last bit came from Civilization the video game, but that’s because 7 Wonders plays like a half-hour, tabletop version of Civilization. The one thing that keeps me from playing more Civ is the game length (and I’m sure the same holds true for many of you), so 7 Wonders steers like a dream. Or does it?

We’ll get to the game review in a bit, but we have to pay homage to the game detail demigods first.

Game Flow:
Players either choose their city/states or pick them at random. A game of 7 Wonders is split into three rounds—or, eras. At the beginning of each era, players get dealt seven cards – for seven wonders, get it? – from a unique deck for each era, and these cards yield building materials, manufactured products, or straight-up victory points.

Once a round – err, era – gets going, you select one card from your hand and pass the rest to the player on your left (if it’s the first or third era) or to your right (if it’s the second era). Before picking up their new hand of cards, players reveal which card they chose from their previous hand and play it, then they repeat the process until only one card remains in each players’ hand. These last cards get discarded to a communal pot (there are player abilities that allow you to snatch cards from this communal discard pile).

After all three eras are complete, tally victory points to determine the winner.

Review:
7 Wonders plays fast, real fast. You have so many ways to win that you can fall prey to analysis paralysis, a condition where you can’t decide which card to pick and play. But despite the many varied ways to win, some victory points are easier to come by than others.

Military conquest only requires basic resources, so if you have a warlike city/state, it’s real easy to rack up points this way. Science victory points take a longer build. There are city/states that emphasis science, but it’s a lot trickier to accrue more points than your opponent(s). Cultural victory points are the ones you get straight up from cards. These don’t stack like military and science points, but you don’t need them to stack. Then, there’s a hidden set of victory points available only during the third era: guild cards. These cards piggyback on whatever your opponents have built throughout the game.

7 Wonders has fantastic balance. But the guild cards can disrupt this equilibrium. I’ve played plenty of games where I built a stellar city/state only to have my neighbor construct guilds that give them victory points for the number of science cards I had or for my cultural achievements. I’ve also built these guilds myself. These cards feel like catch-up cards, and the victories they give paint your win hollow. 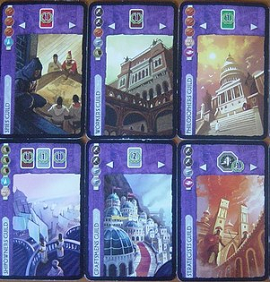 I’m all for close games. A 16-15 extra innings win in baseball is a lot more interesting to watch than a 20-0 shellacking, but 7 Wonders doesn’t need this. Every game doesn’t have to be close. I can withstand the occasional beat down in exchange for a well-earned win. The game only lasts at most thirty minutes. There’s always the potential of a rematch.

One last minor gripe: 7 Wonders lacks a strong theme. Don’t get me wrong, the game’s gorgeous, and it looks like you’re building one of these famous city/states, but you could strip away the theme and add a new one, and it’d work. Fortunately, underneath the pretty is a world-class card-drafting game.

Verdict: Light on theme but strong on gameplay, 7 Wonders deserves its Spiel des Jahres Kennerspiel (Connoisseurs Game of the Year).