This little list may give you too much insight into what happens at the Geekly household when a board game is first opened. We’re talking about a rabbit hole that you may not want to go down. Consider yourself warned.

I like the smell of a new board game. Nothing beats tearing off the shrink wrap, hearing the box fart for the first time as you open it, and having the smell of fresh tabletop game goodness waft over your face.

To be fair, I do this with a lot of things: books, cars, video games, the occasional magic marker. Mmm, magic markers.

I may have brain damage.

Punch out all the bits, put them in piles, and make towers and other things out of them

I love it when I find a lot of punch boards with a heap of little bits I have to poke out. Gloomhaven had somewhere around 30 of these boards, and I was as happy as a kitten playing in gift paper.

I don’t care about the game at this point. I just want to make a fort out of cardboard discs, dice, and wooden pieces shaped like Whistler’s Mother.

Wait. Whistler’s Mother? What game did I just unbox? I don’t care. If you need me, I’ll be in space.

Organize things despite not knowing where they should go

Who needs to read the rules to figure out which things go together in a little baggy or small tackle box? I follow my gut, and it’s almost always wrong. Never trust a gut that suffers from GERD.

At least an hour will be wasted figuring whether the color or shape of an object should dictate where it should go. Eventually, I’ll say, screw it and check YouTube.

See if Rodney Smith (Watch it Played) or Paul Grogan (Gaming Rules!) posted a video on how to play

Who needs to read the rules to figure out how to play a board game when Rodney and Paul will tell me in a short video with time stamps directing me to specific rules? Sure, I’ll follow along in my rule book if I can, but rule books aren’t the best reading material. So many of them have too many Appendices and use terminology I can’t understand. With few exceptions most of these designers expect you to already know how to play. 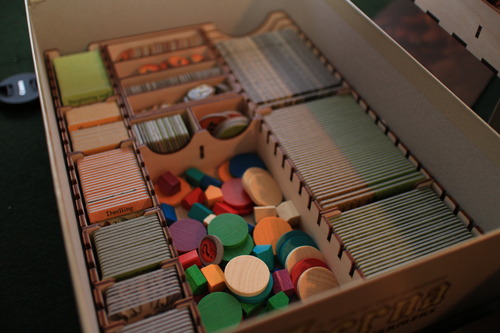 Reorganize things after watching the video

I’ll remind myself that I should never trust a gut that suffers from GERD. If Rodney or Paul were in my house, they’d shake their heads and say, again, Kyle. What are we going to do with you?

I’ll spend another half-hour putting things where they should go and take another hour calming down before asking my friends and family if they want to play. You’d think I’d learn, but most game unboxings end the same way.

You probably know too much about your uncle Geekly’s unboxing habits at this point. What are the things you do when you first open a tabletop game for the first time? Let us know in comments.