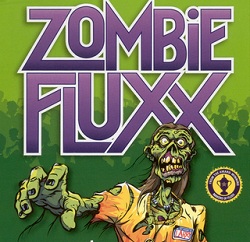 Game flow and Review:
Zombie Fluxx is part of the Fluxx series of card games with ever-changing rules. So essentially, it’s zombie flavored Fluxx. But it has the most interesting card type: Ungoal. The players don’t win. The zombies win.

If you haven’t played Fluxx before, it’s a fast-paced card game where the cards themselves determine the current rules of the game. Each game starts with the following rules: draw a card and play a card. But you add to the rules as you go. One player may add play three cards a turn, another may have you draw five cards instead of one, and another still may place a hand limit on all players.

There are six card types: new rules, goals, actions, keepers, creepers, and the type unique to Zombie Fluxx, the ungoal. I explained the new rules already, so let’s get to the next card type, goals. Goals are cards that allow you to win the game. All you have to do is meet the conditions on the card—usually these conditions are what cards (keepers and maybe even creepers) are in front of you at the time—and you win.

Action cards are fairly straightforward. You play the card, do what it says, and then discard it. But these cards can be very useful. Some give you more draw power, grant you the ability to steal a keeper, or allow you to play more cards than your limit for the turn, which in turn gives you more opportunities to play goals, new rules or keeper cards.

You play keeper cards in front of you. Most of them don’t have any special effect—they just count toward your keeper tally when a goal is in play—but some do have some effects. Weapons like a fire axe can be used to kill off zombies. And there are plenty of zombies in this game.

In other versions of Fluxx, creepers can be any nasty thing you don’t want around, but since this is Zombie Fluxx, all the creepers are zombies. When you draw into a creeper, you have to play it immediately. The creeper doesn’t count as a card you drew this turn or a card you played, so you’ll have to draw and play another card to make up for any creepers.

There are some goals that allow you to win with a creeper (zombie) or two, but you have to be careful in this game. Zombie Fluxx has the aforementioned ungoal. When you draw into the ungoal, you have to play it immediately. If there are a certain number of zombies on the table, the zombies win. 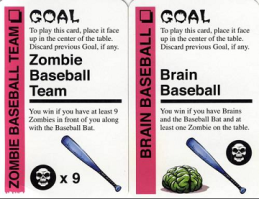 Zombie Fluxx takes the manic pace and quirkiness of the original Fluxx and gives it a zombie twist. Classic horror and zombie movie tropes appear throughout the game. One type of keeper you can play into is the friend, but your friends can get infected. There is an action card entitled “if I ever turn into one of those things, shoot me” that allows you to discard your zombified friend.

As with most Fluxx games, Zombie Fluxx moves too fast to have a true strategy to win the game, but that’s not the point of the game. Like the zombies it emulates, Zombie Fluxx is mindless fun. My father played this game and since he’s contrary by nature, he played so the zombies would win. That’s another way to play this game too.

Verdict: You may not have to show off your big “brain” for strategy, but you’ll have fun with this quirky, zombified adaptation of Fluxx.