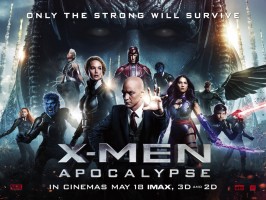 I went into X-Men: Apocalypse with the expectation for it to be “baseline good,” and I wasn’t disappointed. It didn’t exceed that expectation but it met it.

One problem I have with the X-Men comics is that they have an unwieldy roster and a deeply murky continuity. The films (or at least most of them) do a pretty good job of whittling that down and presenting a more manageable story, but Apocalypse stumbled there a bit. They try and have a lot of subplots moving at once; Quicksilver being Magneto’s son, Magneto’s attempt to have a normal life in Poland, Cyclops coming to terms with his power, Jean wrestling with hers, and Xavier meeting back up with Moira after having taken her memories of him. There’s a lot going on there, and it’s a bit too much for every component to give us a satisfying resolution.

Most of the performances were solid in Apocalypse. Sophie Turner’s British accent kept leaking through, and Kodi Smit-McPhee’s German accent came out a little cartoonish at times, and there were some quieter moments in the film where that got distracting.

Without spoiling the ending of the movie, I’ll say my biggest, non-nitpicky critique of the film was how easily things are wrapped up. Certain characters’ motivations change very suddenly, and in the end, Apocalypse’s undoing undermined the character.

As you can see, there’s plenty to pick on with this movie, but for all its faults, it held my attention, and it was genuinely fun.

X-Men: Apocalypse worked for a big, dumb action movie, but for a kid like me, who grew up in the Deep South, undersized, of mixed heritage, and who got his ass kicked every day for being different, these newer X-Men movies don’t live up to the promise of the comic. This probably makes me sound like a social justice warrior, and I don’t care. The X-Men are the social justice warriors of the comic book world. They’re an allegory for the civil rights movement. And these were chief reasons why I was drawn to the X-Men.

Professor X and Magneto are fictional stand-ins for Martin Luther King Jr. and Malcolm X, respectively, and yet the X-Men films have done increasingly less for characters of color. Storm, Psylocke, and Jubilee are nothing more than window dressing. Alexandra Shipp (the new Storm) had more lines, screen time, and did more in her thank you speech before the movie than she did in the actual movie. Jubilee was the quirky Asian friend, going to the mall with the white kids. And while Psylocke kept her comic book look, it’s a look that objectifies women: a svelte Asian woman in a purple dominatrix suit. How can you trivialize two minorities at once when you’re supposed to be the comic book champion for minorities?

Alright. I’m done ranting for now. I agree with Jim, the comic book X-Men do have an unwieldy roster, but it’s not as much the size (hundreds of characters versus the Avengers’ thousands) as much as it is characters changing allegiance at the slightest provocation. It’s common (in the comics) to have one moment with Magneto ripping the adamantium from Wolverine’s skeleton through his pores, and have the next one showing Erik washing Beast’s jockeys and cutting the crust off of Jubilee’s PB&J. Okay. That was an exaggeration, but I did watch Magneto do laundry at the X-Mansion once. Often, these shifts are arbitrary, sudden, and/or have little pretext.

The X-Men films (with the new cast) have done a decent job of explaining and building up to these changes of heart, but X-Men: Apocalypse crowds more mutants into 150 minutes than Avengers films slap men and women into tights. Apocalypse shoves Mystique as the hero of all mutant-kind down our throats. This doesn’t do as well of a job of character development—or explaining motivation changes—as the film thinks it does. It comes off as X-Men cashing in on Jennifer Lawrence’s star-making turn as Katniss Everdeen (The Hunger Games). Mystique even hides her true blue-skinned self for most of the movie, not because she’s ashamed of who she is or she’s trying to hide but because we have to see Lawrence’s face. It’s pandering. And this doesn’t even scratch the surface of the continuity issues Jim mentioned.

I had forgotten that Days of Future Past changed the course of the X-Men storyline, but the previous X-Men movie did more than erase the awful X-Men: The Last Stand, it killed off some characters, changed the relationships of others, and warped the sequence of events for everyone. This yielded a lot of questions in Apocalypse like hey, wasn’t he/she supposed to be in a different country or be a different age or behave in a completely different manner? And that’s before we come back to the X-Men and their history with the civil rights movement.

The newer X-Men films give lip service to the group being outcasts but anyone who has had to live through any discrimination of that type can tell you that what’s in the movies is false. It’s still a joy seeing these characters on the big screen, but the X-Men films need to rediscover their roots.