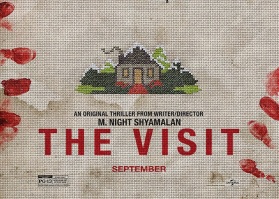 Whenever I tell someone I saw a movie, invariably they ask, “How was it?” or “Did you have fun?” but with a movie like The Visit, those are two completely separate questions. Respectively, my answers are, “awful,” and “yes.” The movie’s premise is flawed. A woman who is estranged from her parents, hasn’t seen or spoken to them in fifteen years sends her kids to spend a week alone with them. Furthermore, while her kids are off with these people she can’t even bring herself to be sociable with, she decides to take off for a cruise with her boyfriend, you know, so there’d be nothing she could do to come to the rescue and end our story prematurely should something go awry. If none of this sounds normal to you, congratulations. You’re probably not a particularly crazy person, but I don’t think Mr. Shyamalan will cast you in a movie.

The kids are the main characters here. The big sister is a tightly-wound, pedantic wannabe-filmmaker who throws around just enough vocab words pertaining to “narrative” to satisfy people who may have slept through a creative-writing course or two. Her little brother believes himself to be a rap prodigy, but is actually the single best argument I’ve ever seen for forced sterilization. You may think I’m overstating the case, but I’ll tell you this: at one point in this movie we see a naked woman in her 70’s howling and scratching at a wall, and that’s nowhere near as hard to watch as this kid’s freestyle rap about pineapple upside-down cake. I can assure you, by the time you hear the haughty Dawson’s Creek rip-off tell her little brother she’s at least “two standard deviations” smarter than him, you’re actually rooting for the old lady with the kitchen knife.

As you may be able to tell, all of this gets to be kind of funny, whether it wants to be or not. If you can keep your popcorn down during T-Diamond-Stylus’ (yes, that’s our rap prodigy’s assumed name) raps, it actually gets to be entertaining against its own will. The implausible elements add up to what becomes a fun game of I-Spy, if you can talk your movie neighbor into playing with you, and some of the attempts at jump-scares create legitimate laugh-out-loud moments.

I won’t spoil it for you, but you will never play Yahtzee the same way again after watching this film. It’s definitely a so-bad-it’s-good type of movie, but it’s not such a good so-good-it’s-bad type of movie that I’d recommend a trip to the theatre. It’ll be on Netflix soon enough. When that happens, invite a friend over, invent a drinking game, and go to town on it.