Well, doesn’t that glass sphere make time travelling convenient? The Time Sphere was created in the future and allowed the Time Master, Rip Hunter (and sometimes Booster Gold), to travel through time and space. Harrison Wells, or Eobard Thawne, knows his history. It was Rip Hunter who created the Time Sphere.

Yep, he’s just your average time-traveling adventurer from the future. In fact, Rip lives so far into the future that his base of operations is at the edge of the end of all time. He’s played significant roles in several DC Crisis events, and he’s one of Booster Gold’s distant descendants.

Better yet, we’ll see Rip in the flesh when he headlines The CW’s new fall series, DC’s Legends of Tomorrow. (Here’s our write up on the new spinoff series.) If I could, I would build my own Time Sphere and travel to this fall and watch the show today. Or would it still be considered watching it in the future?

When Cisco asks Wells about the Time Sphere’s construction, Wells told Cisco that he could prevent degradation under conditions of extreme heat with a Cobalt resin. Could that be a reference to Cobalt Blue?

Glimpse into the future

We saw a lot, when Barry ripped through the Speed Force barrier: scenes from the past and the future. If you were wondering who that meta-human woman with white hair was, the safe money’s on Caitlin Snow as Killer Frost.

The massive building guarded by two gigantic statues of The Flash was the Flash Museum. If only there was a transport I could use that would allow me to travel through time, space, and reality to visit the Flash Museum. Rip has all the fun. 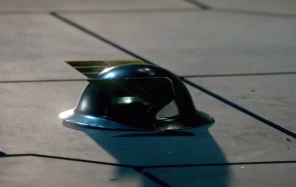 Did you catch that not-so-subtle winged hat? That’s the helmet of the first Flash, Jay Garrick. We’ve seen Barry and Wells travel forward and backward in time, so what’s keeping the Golden Age Flash from doing the same? Eobard said that he had someone he had to catch up with. Could that be Jay Garrick?

A New Zoom and a Tragedy

Who knows if The Flash will go in a different direction for the Reverse-Flash? But if they do, they could go the route of Zoom or Hunter Zolomon. This might be a long shot because Harrison Wells was very loosely based on Hunter, who thought a great personal tragedy would help Wally West become a better hero, but Hunter’s powers are less about running really fast and more about time-traveling, so it looks like he’s running fast and that could work if The Flash turns to more time-traveling antics.

Henry says that Barry might better understand things if he had kids himself and in the comics, he does. When Barry and Iris go to the future to retire, they have a pair of twins and a grandson, Bart, who would become Impulse/Kid Flash/The Flash. Phew. Looks like Bart has more nicknames than Roy and Thea.

Wells says this a lot, but it was more sinister this time, and Henry Allen joined the fun by uttering these same words to Barry at the time of his wife’s death.

Nice one, Martin Stein. But does Stan Lee’s catchphrase work on a show about The Flash?

Cisco and his Pop References

“Back to the future.”
“So long, and thanks for all the fish.” Douglas Adams’ Hitchhiker’s Guide to the Galaxy.
“1 minute and 52 seconds.” Another “52” reference.
“May the Speed Force be with you.” Star Wars

Cisco got his vibe on after all. We’ll have to see what happens with his transformation into a superhero.

Ah, Caitlin got hitched this week. In the comics, Caitlin’s alter ego Killer Frost is mortal enemies with Firestorm. I can’t wait to see what The Flash has in store for us because we know Caitlin’s going to go through some cha-cha-cha-changes.

Eobard Thawne’s fade into oblivion looked a lot like Barry’s own fade out in Crisis on Infinite Earths. I don’t think that’s a coincidence.

A similar antimatter-like event horizon, to the one we saw at the end of this episode, occurred in Zero Hour: A Crisis in Time. In Zero Hour, too many anomalies in the time stream caused existence to eat itself. That doesn’t sound like fun. 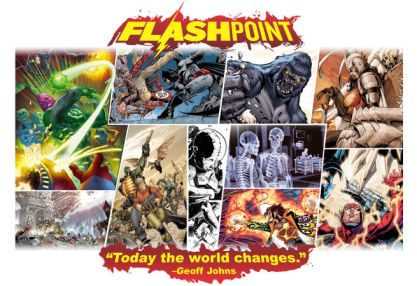 It looks like Barry averted the events of Flashpoint, a storyline in the comics that showed what would happen if Barry saved his mother. Or did he? The future Flash waved off our Barry, perhaps because he already knew that nothing good can happen from saving his mother. Then there’s the fact that John Wesley Shipp (Henry Allen) said that the Flash writers are looking at Flashpoint stories for season two. Perhaps we will see this bleak future after all. 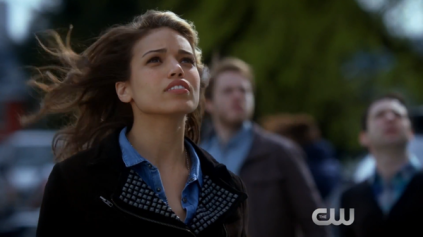 Yes, there was Hawkgirl sighting in this week’s episode. She was one of the bystanders in the final scene.

Did you miss our Flash review? Check it out here.