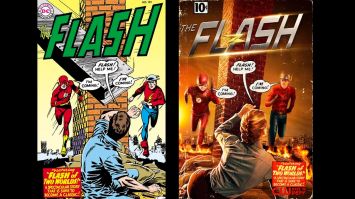 The Flash of Two Worlds

Even the title of this week’s Flash is an Easter egg. “The Flash of Two Worlds” was the name of the first crossover between Barry Allen (Flash of Earth-One) and Jay Garrick (Flash of Earth-Two). The picture above shows the original comic book cover and a promotional picture for this episode side-by-side.

Two Earths are better than one

The Flash hasn’t been hinting at Earth-Two, it’s been screaming about Earth-Two at the top of its lungs and this week Dr. Martin Stein explained the multi-verse concept to Team Flash, much to the chagrin of Detective West. Yes, the same people inhabit each parallel Earth but they can make vastly different life choices. For instance, Bruce Wayne, who still fights crime as Batman on Earth-Two, is married to Selina Kyle (Catwoman).

Wayne and Kyle’s shipping is just the tip of the iceberg when it comes to the wacky things that can happen in the multi-verse. DC rid itself of the multi-verse with its Crisis on Infinite Earths event (in the mid-1980s) but the multi-verse is back and so are the countless characters who stem from it. We mentioned last week that the Justice Society of America resides on Earth-Two and that bears repeating. We would cease to have new stories about Jay Garrick and the rest of DC’s golden age heroes if there wasn’t an Earth-Two.

Given Dr. Stein’s lecture, we aren’t looking at a 52-world multiverse. DC only recently reinstated an infinite multiverse so The Flash is staying current with the DCU—maybe. We did learn that there are 52 breaches between the world of The Flash and 51 other worlds, so while there may be infinite Earths, we should only be concerned with 52 of them. 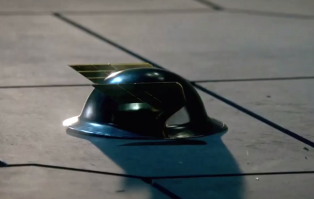 Jay Garrick: The Flash of Earth-Two

Did we hear that Jay Garrick received his powers by experimenting with heavy water? Yep. That’s how Garrick got his super speed. Well, sometimes the writers referred to it as hard water and other times heavy water but no matter how silly the origin may sound, The Flash honored the source material.

Jay Garrick says that he obtained his signature helmet during the War of Americas but DC comics fans were most likely scratching their heads over that reference. That’s because the fictional conflict known as the War of Americas occurred in the world of Jack & Bobby, a 2004 television show by Arrow and The Flash executive producer Greg Berlanti. Green Arrow writer Brad Meltzer was another producer of Jack & Bobby and one of the writers of the series was none other than Marc Guggeinheim, Arrow’s showrunner. The War of Americas may not have a DC comics link but a lot of the creative people behind DC’s TV universe were involved with Jack & Bobby.

Patty Spivot may have shown up out of nowhere, but she isn’t a made-for-TV character. In the comics, Patty helped Barry in the crime lab on numerous occasions, so don’t be surprised if she stays on the show for quite some time.

Patty is the first of many folks whose lives have been altered by the various meta-humans and that is—according to the dialogue—what fuels her interest in the meta-human task force.

Monty Python and the Holy Grail

You’re alright in our book if you can quote Monty Python, and Patty Spivot’s alright in this instance. Plus, Patty dropping some Monty Python and the Holy Grail lines gave us an excuse to post a pic of the movie poster. 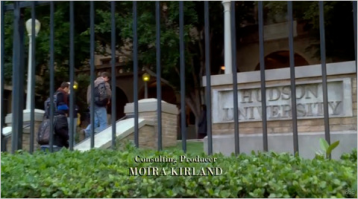 Patty Spivot mentioned going to Hudson University when she pressured Detective West to give her a job on the metahuman task force. Plenty of over DC Comics personalities attended Hudson University besides Patty. Dick Grayson attended for one semester but Professor Martin Stein, Crysal Frost, Louise Lincoln, and Duela Dent (Two-Face’s daughter).

Zoom was portrayed as a black version of the Flash and while there is a character by the name of Zoom, there’s also a Black Flash but the Black Flash isn’t so much a villain as he is a force of nature. The Black Flash is the grim reaper for speedsters. It’ll be interesting to see if The Flash alters these characters to make a new one.

The Zoom in The Flash wants to be the best speedster on any Earth, so he sort of is the embodiment of death. 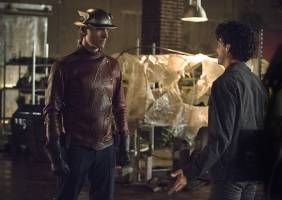 Eddie Slick is also known as Sand Demon in the comics. His powers are similar and comparable to Spider-Man’s rogue Sandman but instead of beginning his career as a Flash villain, Sand Demon went toe to toe with Firestorm, having first appeared in Firestorm #51. Slick only lasted two years before he died in Firestorm #75, so I guess his death at the end of this week’s episode makes some sense.

Slick mentioned being locked up in Blackgate penitentiary, which is a lesser used prison in the DC Universe. If you’ve ever played the Arkham series of video games or—heaven forbid—watched the Gotham TV series, you’ve heard of Blackgate plenty of times.

You’ve gotta love it when the two DC comics TV shows mention each other and Green Arrow was a nice touch. I especially liked Cisco response of “I hate it when they add a color to the name.” Nice, Cisco.

Ah. Cisco summons his “vibe” powers and channels them in order to defeat this week’s villain. I don’t know why Cisco wouldn’t want to use this power to help the team but this won’t be the last time he uses these abilities. I guarantee it.

I feel guilty for including the above picture from 1997’s Batman and Robin but that was the first time The Fluoronic Man made a screen debut and apparently, Central City has a greenhouse named after Jason Woodrue, the Fluoronic Man’s alter ego. I don’t know if we’ll catch a glimpse of the character in The Flash. He was mentioned but never seen in the Swamp Thing TV series so this could just be a name drop.

We caught a glimpse of Earth-Two’s Harrison Wells at the end of this week’s episode but who’s to say whether Wells of Earth-Two is good or evil. Only time will tell.

Just in case you missed our review of “Flash of Two Worlds” here’s a link.