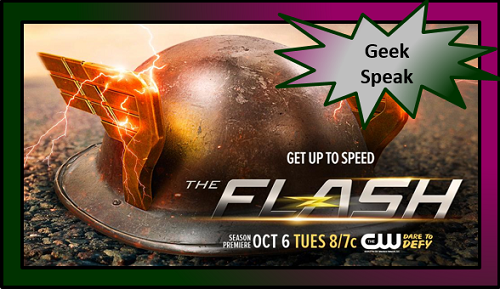 Flash came back reasonably strong from hiatus this week. In fairness, I watched it after Arrow, so that may be skewing my opinion, but I enjoyed it.

I can’t say I cared at all about Iris’ storyline, but that’s been the norm this season. I’m anxious for her to be used as more than romance fodder, and her awkward moments with her new editor make it look like that’s not happening in the foreseeable future.

The Trajectory character was a fair nod to a lesser-known character, but I couldn’t be made to care much about her over the course of one episode, and I don’t remember Caitlyn going to her for help with Velocity-9. It’s possible I just simply don’t remember it, but I’m also not sure it wasn’t something they’re saying happened off screen. If that’s the case, it feels like a bit of a cheat to me.

This could have just been another villain of the week thing, but the conclusion to the confrontation on the bridge, the blue lightning helped bring things back around to Zoom, and that worked to tighten the episode and stop it from being an hour-long tangent.

We’ve been dealing with Barry needing to get faster since the beginning of the show. It’s almost become a mantra, and I feel like there needs to be some more movement there. The scene with Barry holding the Velocity-9 felt a lot like an after school special.

Harrison’s subplot with Jessie wasn’t bad, but it wasn’t particularly interesting, either. I get where they’re going with this. They’re setting us up for another speedster, and that will doubtlessly come about due to her being injecting by Trajectory, but The CW is running the risk of making the show too bloated. Just as Trajectory had an addiction to Velocity-9, The CW may have a problem with adding characters.

“Trajectory” wasn’t a bad episode. This week’s titular speedster brings the development of Velocity-9 story arc to a close and provides Team Flash with what they need to discover Zoom’s identity, laying the ground work for the season’s finale. Trajectory wasn’t a huge Flash character in the comics—she only appeared in eight issues—and while I buy that she and Caitlin were friends in the past, I would’ve liked to have seen a little context. This week wasn’t the first appearance of Mercury Labs, so why haven’t we seen Eliza before this week? This is a small thing, but it’s still a missed opportunity. A little planning goes a long way.

I liked how Cisco is honing his Vibe powers, but Team Flash discovering Zoom’s identity was too easy. The audience had only known who Zoom was one episode before Cisco. And I didn’t like how Barry reacted after discovering the news. Jay means next to nothing to Barry. Barry mistrusted Jay until Earth-2 Harrison Wells showed up and watching Barry run into the forest and scream gave me the vibe of Henry Cavill’s Superman screaming after killing General Zod during Man of Steel. You didn’t set up any of that, Flash. It might have been good acting on Gustin’s part, but it was ineffective writing, and the scene was forced.

I liked the parts that had something to do with Zoom and I guess there isn’t much the show can do to further the main plot while the gang is shut off from Earth-2. I also don’t see how future episodes can hold back Zoom without coming off as filler.

Jim and I talk about suspension of disbelief in terms of Flash and Arrow and that might sound silly because they’re both super hero fantasies, and suspension of disbelief may be the wrong term to use. The problem we’re seeing with Flash is that fantasies aren’t devoid of logic; they have their own internal logic. A man who can run so fast that he can rip 52 holes into the fabric of existence should be able to run and jump 50-150 feet across a chasm and shouldn’t have an uncatchable speedster.