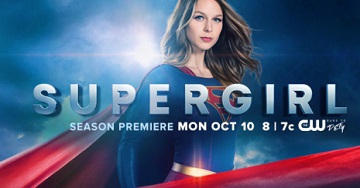 I’m going to start with a short recap of Supergirl’s first season because we’ve never covered Supergirl on Geekly before. I binge-watched the first season on Netflix within the last month so I could—maybe—add it to the CW shows we review. Jim and I weren’t impressed with the pilot. Supergirl rushed faster than a speeding bullet to develop its characters in the form of data-dump dialogue and the show came at a time before Batman v Superman and DC coming to terms with how poorly they portrayed their characters on the big screen, so there were some coy, obnoxious nods to Man of Steel. I’m also nowhere near Supergirl’s target audience (young girls with little to no knowledge of the comic book character). But I stuck it out for six or seven episodes, and Supergirl did what every other show by this creative team (Arrow and Flash writers/producers) does and got enjoyable.

Melissa Benoist makes for an adorkable Kara Danvers/Supergirl. She must’ve studied Christopher Reeve’s Superman because she’s ringer for his timing. The rest of the cast got better and their characters more layered as the season progressed. Calista Flockhart (Cat Grant) illustrates this development the most. She started the season as an over-the-top, tough-as-nails woman in charge, but when she stopped telling us who she was (in dialogue) and displayed a nurturing side, she gave a more believable performance. I could’ve used Chyler Leigh (Alex Danvers, Kara’s adoptive sister) or Laura Benanti (Alura Zor-El) as examples too, but as the cast as a whole became more comfortable.

I won’t say that Supergirl’s first season was the greatest, it had its flaws. I’m still not happy with the show casting Mehcad Brooks as James Olsen. He’s Jimmy Olsen—not James—and he’s not a hunk; Jimmy was the blueprint for Peter Parker/Spider-man, so he’s supposed to be a geek who can tell you the differences between Wally West and Barry Allen’s Flash. Supergirl also suffered from the same writing issues as Arrow and Flash, but the younger intended audience did make it a wholesome show and that’s something I hope the CW continues. More than Superman, Supergirl has to be uplifting. And Supergirl’s first season did an admirable job.

Well, that took longer than I would’ve liked but I did sum up an entire season in a few paragraphs. Let’s get to this week’s “The Adventures of Supergirl.” I liked it when Supergirl cut pretense and called Superman by name. Kara is Kal-El’s cousin so you can’t call Supes “The Man in Blue” or the “Big Guy” for twenty plus episodes. We even caught glimpses of Superman in the first season, but “The Adventures of Supergirl” showed us Superman and that brought a smile to my face. Yes! Supergirl exists in the same universe as Superman—if only that meant that Arrow and Flash existed in a universe with a Superman. Oh, well. It’s a step in the right direction.

What’s even better is that Superman doesn’t steal focus away from Supergirl. It’d be easy for an icon like Superman to overshadow Kara, but Benoist’s charisma and screen presence won’t let that happen. This is her show.

I also liked Supergirl’s inclusion of Lena Luthor (Lex’s sister), and how in this version of Supergirl’s story (unlike the version we’re getting to know in DC’s current Superwoman title) Lena’s a woman who wants to climb out of her family’s shadow. That doesn’t sound like Kara at all. Katie McGrath’s portrayal of Lena Luthor as a confident businesswoman without making her heartless was also good to see; Supergirl learned from their missteps with Cat Grant last season.

Jim might groan that we got a villain-of-the-week this episode, but that’s not exactly the case. This week’s villain set up Project Cadmus and that could have some long-lasting effects on Supergirl and the Arrowverse, should the shows intersect. All in all, “The Adventures of Supergirl” was fun and promising.

Supergirl dropped the Olsen-Danvers love connection (Jimmy’s not supposed to be a heart throb), J’onn J’onzz and Kal-El have an interesting history, and this week’s episode did something that Marvel shows/movies haven’t done well in the past; it didn’t shove feminist rhetoric down our throats. You don’t have to cheerlead or preach feminism when the main character is a kick ass female and you give female actors interesting, complex, and empowering roles. Show us what a woman of steel can do. “The Adventures of Supergirl” did just that.