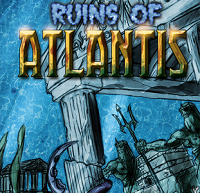 Deck Concept: Ruins of Atlantis is a very alien environment, so neither the heroes nor the villains are left unscathed. This leads to global effects. Lots of them. Expect a lot of increases of power, damage to the field, and extra abilities (both beneficial and detrimental).
Biggest Global Effect: Atlantean Font of Power: At the end of the environment turn, play the top card of the villain deck. Play the top card of each of the hero decks in turn order. If the played card is a limited card already in play, discard that card and play the next card. At the start of the environment turn, destroy this card.