First Appearance: Sentinels of the Multiverse: Shattered Timelines
Who she is: A thief with uncanny luck
Initial Side: Charmed Scoundrel
Innate Power (Initial Side): If Kismet did not flip this turn, she deals each hero target 1 psychic damage. Whenever a hero target deals another hero target 4 or more damage, destroy 1 jinx card. At the end of the villain turn, reveal the top card of the villain deck. If it is a lucky card, put it into play. If not, shuffle it into the villain deck.
Advanced Power (Initial Side): At the start of the villain turn, Kismet deals each hero affected by a jinx card 2 psychic damage.
Villain Cards that Begin Game in Play: The Talisman, Enchanted Heirloom (7 HP): When flipped to this side, restore this card to 7 HP and put it in the villain play area. This card is indestructible. When reduced to 0 or fewer HP, flip this card. Increase damage dealt by Kismet by X, where X = the number of jinx cards in play.
How she flips to her other side: If the talisman is in front of a hero.
Nemesis: Setback
Second Side: Deranged Miscreant

Kismet and The Talisman

Innate Power (Second Side): If Kismet did not flip this turn, she deals the talisman 2 irreducible psychic damage. At the end of the villain turn, Kismet regains 1 HP for each lucky card in play. Then, Kismet deals the hero target with the highest HP X psychic damage, where X = 9 minus the HP of the talisman.
Advanced Power (Second Side): Increase damage dealt by Kismet by (H), where H is equal to the number of heroes, minus 2. 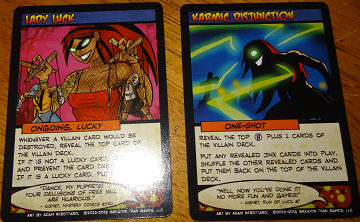 Most Fiendish Ongoing Card: Lady Luck: Whenever a villain card would be destroyed, reveal the top card of the villain deck. If it is not a lucky card, discard it and prevent the card destruction. If it is a lucky card, put it into play.
Most Fiendish One-Shot Card: Karmic Disjunction: Reveal the top (H) plus 1 cards of the villain deck. Put any revealed jinx cards into play. Shuffle the other revealed cards and put them back on the top of the villain deck.
Most Fiendish Villain Target Card: The Talisman, Stolen Charm (7HP): When flipped to this side, restore this card to 7 HP and put it in front of the hero with the highest HP. This card is indestructible. When reduced to 0 or fewer HP, flip this card. The hero this card is in front of gains the following power: Reveal the top 3 cards of any 1 deck. Put them back on top of that deck in any order.

How to Defeat Kismet: Take out the talisman, and once the talisman is in front of a hero, have that hero use the talisman’s ability to dictate which cards are on top of the villain deck. This will limit the amount of damage Kismet can deal.

Then, you want to make sure the talisman stays in front of the heroes as long as you can. Kismet deals two damage to the talisman at the beginning of her turn, so you’ll have to dedicate some healing for the talisman or find a way to redirect damage like Legacy’s Lead from the Front and Heroic Interception.

If Kismet manages to get her talisman back, repeat the process until you whittle her down.