Game flow:
Designer Philippe Keyaerts developed Small World as the fantasy follow-up to his award-winning Vinci. Players take turns controlling fantasy creatures with various powers to gain control of the world. The only problem is that the world isn’t very big, and there’s constant war.

You begin the game by revealing – in a column – five of the 14 different species of fantasy creatures. Each creature has its own tile, and next to each creature tile is one of 20 special power tiles. The creatures showing should have powers next to them, and then the remaining tiles (both creatures and powers) are kept in a shuffled pile. All the creatures have their own innate powers. For example, magicians gain extra victory points (or coins) for occupying zones with crystals, while Dwarves do the same with zones containing mines. But the accompanying special power tiles increase these creatures’ abilities as in the “Flying” power that allows a creature to overtake land that isn’t adjacent to land you already own. On their first turn, players pick the race they want to play. 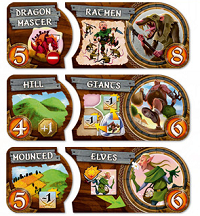 On each turn, you either use the multiple tiles of your creatures to conquer land, or you give up your race – and the rest of your turn – to send it “into decline.” A race’s “in decline” side is the black-and-white side of the tile. Most games will have you send at least one race into decline because you will extend yourself too far on the board, so you’ll have to choose the most opportune time to do this because as you can guess, a race in decline isn’t usually as strong as an active race.

At the end of each of your turns, you score one victory point (or coin) for each territory your races occupy. You can control one active race and one in decline race (you do gain points for this race, too) unless a special ability says otherwise. The player with the most coins after the final round wins.

Review:
Small World was released with a ton of fanfare and expectations, and it lived up to them for the most part. But one thing separates Small World from its predecessor Vinci: the whimsical artwork and setting cause some people to not want to give up the race they’re playing. 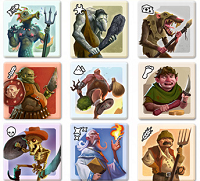 This flaw leads to some poor to no strategy by some players. As I mentioned in the game flow, you have to place at least one race into decline because you will overextend your race. So people who fall in love with their Elves with Flying and don’t want to get rid of them, have already lost the game. This in turn leads to hard feelings.

These hard feelings are magnified when paired with the small game world – hence the name Small World – and each player encounter a battle each turn. I haven’t found that constant battle is as big an issue as the not wanting to get rid of a race, but it can be a turn off to some gaming groups.

There are some gameplay balance issues, too. Some special powers a lot better than others as are some of the innate abilities for the different races. If you get the perfect special power to go with an overpowered race, you can browbeat your opponents for a round or two and then coast to victory.

But despite these issues, Small World offers enough strategy and varied gameplay to prove Days of Wonder’s tabletop giant status.