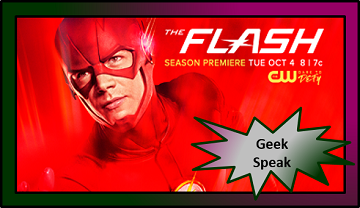 The Music Meister is a forgettable Brave and the Bold cartoon series villain but this show colors him as a pseudo-Cupid. I can hear Jim groan and he didn’t even watch “Duet.” Yes. Love took centerstage because it needs to in every CW series and any manufactured tension stemming from said romantic entanglements, in Flash and Supergirl, were undone in forty minutes. I’d sing and dance if I thought these shows wrung out the schmaltz, but it’s the CW. I’m sure they’ll concoct an asinine love story next week.

“Duet” shoehorns Barry’s love of musicals, Singin’ in the Rain specifically, as the reason the world he’s zapped into is a musical one. It even tries to rewrite Kara as a Wizard of Oz aficionado. It’s not like these two things couldn’t be true but it’s convenient, and the show crams a lot of backstory into ten-fifteen minutes. The CW should be honest. Melissa Benoist (Supergirl) and Grant Gustin (Flash) are Glee alums and the network wanted to cash in on their connection with fellow Glee cast member Darren Criss (Music Meister). “Duet” did a good job as a Glee reunion but it did little else well.

Music Meister didn’t serve as a good villain. He absorbed Supergirl and Flash’s powers and pretends to go on a crime spree. I say pretends to go on a crime spree because Martian Manhunter, Kid Flash, and Cisco capture him far too easy, lock him up, and he escapes Star Labs’ holding cell like it’s no big deal. What was his purpose? The power of love?

Sure. There were plenty of great songs, one cringe-worthy “Super Friends” song, and Jesse L Martin (Joe West) showed his Rent-worthy singing chops, but the show focused on the weakest part of its story: romance.

I might be in the minority. Glee has a lot of fans, and I watched it for a short while too, but I’m not sure how much overlap Glee and Flash fans would share on a Vin Diagram. It appears folks who would never watch the Flash tuned into “Duet,” while long-time fans skipped the episode. I don’t think we’ll see too many more musical episodes, so any new fans may be disappointed with Flash if they stick around. But who knows? Maybe this ploy will work.

My only hope is that both Supergirl and Flash will give romance a rest and focus on another aspect of their respective stories. I doubt that will happen.

Oh, I forwarded Jim a video of the “Super Friend” song. Misery loves company. Share my pain, buddy. “I’m your Super Friend.” I would’ve been more impressed if Ollie was singing.