Four mystical faction face off for domination of the fairy tale land: dragons, fairies, knights, and the realm of shadows. You have control of which one will reign supreme by drafting cards, choosing your forces, and affecting the cards your opponents have at their disposal. Who comes out on top of this Fairy Tale? You decide.

We’ll get back to the fantastic in a bit but first, here’s some technical jargon. 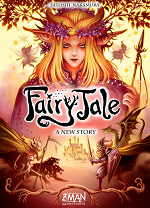 Game Flow:
There are four rounds of card drafting in a game of Fairy Tale and most of the game revolves around card drafting.

Play begins with a round of drafting and during each round, players are dealt five cards. They pick one card they want to keep, places the card they have chosen face down in front of them and passes the remaining cards to the next player (the player to their left, if it’s the first or third round of drafting, or the player to their right during the second or fourth rounds). You repeat these steps for all five cards in your hand and then you reach the play phase. 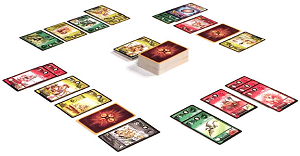 Every card has a point value that’ll score you points and bring you closer to victory, but some cards have special powers. The most common powers are flipping and unflipping other cards. A card is considered flipped if it’s face down and unflipped if it’s face up. Since face up cards are the only ones that score points, you can prevent some of your opponents from scoring points with the cards in their tableau, while flipping over more cards of your own.

After four rounds have passed, each player tallies the points in front of them and the player with the most points wins.

Review:
I love the card drafting mechanism, and Fairy Tale does a great job of implementing it. By drafting cards you not only dictate which cards you’ll get but influence the cards your opponents choose.

Example of the four factions

Most of the colored factions score you more points if you’ve collected more of the set of cards—I have seven “Children of the Dragon” in front of me so each of them counts seven points, representing the number of “Children of the Dragon” I own. If you see your opponent stocking up on one of these factions, you can put the kibosh on them in a hurry by either flipping their cards (card powers) or picking up a few of these cards so the cards won’t ever reach their hand. Set collection and card drafting play off each other well in this game. Fairy Tale also has more advanced cards, marked with an “E.”

Advanced cards have additional powers (mainly Hunt and Draw) as well as more set collection possibilities. I prefer the base game without these added goodies, but if you’ve played a lot of Fairy Tale and have gotten bored with it, the advanced cards add just enough spice to keep the game fresh for several more plays.

My only complaint with Fairy Tale is the same one I have for 7 Wonders, a game that borrowed a lot of the game mechanisms from Fairy Tale. This game has very little theme. It’s a pretty game about dragons and fairies, but you don’t feel like you’re playing dragons and fairies. Even so, Fairy Tale’s a lot of game for fifteen to twenty dollars.

Verdict:
The predecessor of a lot of modern card drafting games, Fairy Tale sets the standard as it marries card drafting with set collection.

If you’re interested in Fairy Tale, you can download the iTunes app and play the basic rules game for free here.