I haven’t written a straight up tabletop game review in quite some time so I’m going to do one for last year’s (2016) Spiel des Jahres winner Codenames and one of its spinoffs Codenames: Pictures. (Here’s the link for Codenames: Pictures.) But before we get to the game, let’s cover some pesky technical stuff.

Players: 2-8 (many more can play with two teams)
Play time: 15 minutes
Intended audience: 14+ (but you could teach someone as young as ten)

Players form teams—there is a single team variant, but usually, players split into teams—and teams are further split into one person as its clue giver and everyone else as clue decipherers. Clue givers are trying to give clues that will have their team (of clue decipherers) guess which words are assigned to their team, while avoiding clues that will lead to the assassin card (instant loss) or the other team’s cards. The first team to discover all its cards (code words) wins.

Clue givers and clue decipherers sit on either side of a table, and a 5×5 grid of cards with words printed on them rests between the givers and decipherers. It should look like this. 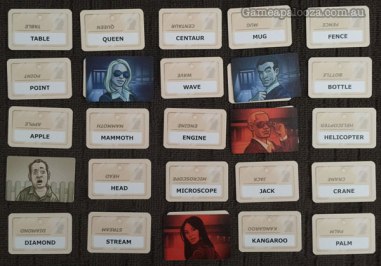 The clue givers also have a map card that tells them which word cards are their team’s words.

Each clue giver takes alternating turns, giving one word clues that tie multiple words of theirs together and provide a number of the cards (words) that fit that clue. For example, “Food 4” could be a valid clue if a clue giver is trying to get their team to guess the words “ham,” “orange,” “bread,” and “pie.”

Clue decipherers touch the cards they think match their clue. They keep guessing if they guess correctly or they can pass their turn to the other team if they don’t want to risk choosing an incorrect card. A team’s turn ends immediately if they pick a picture that isn’t one of theirs and play passes to the other team

The first team to guess all their cards wins.

There are a few more twists and turns to the rules, but that’s the gist.

Most gamers have a preference of Codenames or Codenames: Pictures. If you’re more of a visual person, you may like Codenames: Pictures (here’s a link to its review). There’s even a backlash of players who don’t like all the hype Codenames has gotten over the past couple years.  As of this writeup it’s the highest rated party game on Board Game Geek. It’s one of the only party games to ever win the Spiel des Jahres. It’s the game that keeps the lights on at Czech Games Edition. And it’s a simple concept.

I like it. Codenames is a versatile party game. I’ve seen clue givers in small groups scratch their hands and contemplate each clue. I’ve seen larger groups bust out laughing at conventions. In fact, Codenames usually draws huge crowds at cons and generates clouds of noise.

Analysis paralysis (taking a long time to think about one’s turn) can be a deterrent. I’ve waited at the table for someone to come up with the perfect clue. Other folks can’t handle the pressure of being a clue giver; there’s a lot more stress on the giver than there is on the decipherers. But it’s a solid party game. It’s one of the best on the market, but if you don’t care for party or word games, you most likely won’t like Codenames.

I’m not sure if Codenames deserves all the praise it gets, popular opinion tends to sway people, but I can see the game selling copies decades in the future.

Do you think Codenames deserves the praise it gets? Which version of Codenames is your favorite? Let me know in the comments. I’ll be playing some more games but until then, thanks for reading.