Not So Much of a Secret Identity

We’ve complained (in the past) that a lot of people know that Oliver Queen is the Arrow, but this week, Captain Lance spilled the beans to the rest of Starling City. This could have huge implications for Ollie and/or Roy. But Ollie is more open about his superhero persona than his crime fighting brethren. He has revealed his identity a few times and most notably in Justice League: Rise and Fall, where he stood trial for his actions in a court of law. We’ll have to see if this revelation stands or if Ollie is more than happy to have Roy take his place.

We caught another glimpse of News 52, the obvious reference to DC Comics’ The New 52. 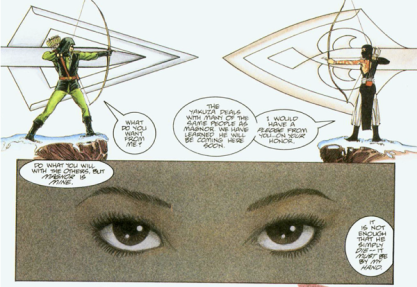 That wasn’t Shado. It was her twin sister, but Shado didn’t have a twin sister in the comics. Her only known blood-relatives where Oliver’s son (yes, they had a kid together) and her father, who was a member of the Yakuza. Still, we saw more of Celina Jade, and that’s not a bad thing. 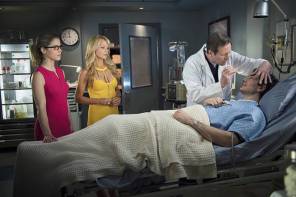 Yes! Ray Palmer’s getting closer to becoming The Atom. He injected himself—or Felicity injected him at Ray’s request—with nanotechnology which allowed him to shrink his blood clot. I know the doctor said that it vanished completely, but The Atom can make himself so small that you can’t find him, so I’ll say that the blood clot shrank. If that’s the case, Palmer might be able to shrink himself over time.

“All these masks, they started with him.”

We’ve seen this trope with Batman for some time, and we’ve heard the same question in the past. Did the super villains make the Arrow, or did the Arrow make his super villains?

Check out our review of Arrow “Public Enemy,” here.