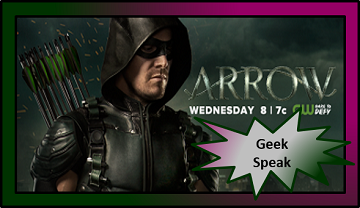 “A Matter of Trust” wasn’t as bad of an episode of Arrow as ones in the past, but it’s bad for all the same reasons we’ve covered.

I’ll get the easiest one out of the way first. Have I mentioned I don’t like Felicity? Because I feel like I might have said that before. Anyway, I don’t like Felicity, and her subplot about feeling guilty over the destruction of Ragman’s hometown is boring me because of that. Intermittent has to be a tough thing to live with…intermittently.

Speaking of forcing the guilt angle, Diggle’s subplot is also clubbing us over the head with it. I get that he feels remorse about killing his brother, but judging by the show’s handling of grief and other human suffering, he should have moved forward somewhat. I mean, Felicity and Ollie have surely nailed at least a few dozen people since John’s been moping in the army, and now a cell. Keep up, John! In all seriousness, the real problem with Diggle’s story is it has him isolated and stagnant, where he can’t progress and can’t contribute anything to the main story.

The teamwork motif came back too, and it was as annoying as before. Besides Curtis, who is on thin ice with me as he acts more and more like a Felicity clone, I don’t know any of these new characters. They haven’t given me anything to invest in, and so they’re really just taking up screen time.

I could go on and pick apart the same things I’ve griped about the last few weeks. There’s been no improvement, but let me get to the heart of why this show is boring me. It began with Tobias Church. He was generic, but the possibility always exist to build on a generic character, so there was potential. Church was overtaken by Prometheus, who certainly looks cool, and has a decent comic book pedigree to pull from. Okay, Prometheus can be the big baddie. That works. Sure, Church’s buildup so far is wasted, but I can live with that. Whoops, there’s no Prometheus this week? Now we’re supposed to watch Solomon take a Joker-style chemical bath? If you say so…but what’s Prometheus up to? This show works best when there’s a good buildup to a confrontation with a central villain, and it’s robbing itself of that.

Sure, we got cute inside jokes this week. Yay, we saw Curtis put a “T” on his face. Yep, we know Ollie likes Hockey masks because he played Casey Jones in the Ninja Turtles movie, but are they really trying to breathe life into the show with this stuff? I’m afraid it’s looking like it.

I agree with everything Jim mentioned in his review. We were messaging back and forth while watching “A Matter of Trust” and I think I may have said that we’ve known who the big bad was by episode 3 the past four seasons of Arrow. We don’t have that clarity in season 5, and that’s not good. Since Jim covered Arrow’s surface issues, I’ll try and dig a little deeper to the biggest reason why I think Arrow is suffering.

It’s bad enough when Arrow has its own problems; it doesn’t need to inherit one from Flash. I’m talking about time travel and the manipulation of the storyline. Up to this point we’ve seen a gender bender to the Diggle baby as the only repercussion from Flashpoint, but that’s sure to change.

Every Arrow recap (at the beginning of each episode) reminds us that Barry changed the sex of the Diggle baby by changing his show’s timeline. Every Flash commercial poses the question, will this be the week Barry changes time again, and we catch a glimpse of a Diggle family photo. I can’t take anything that happens on either show seriously until Arrow and Flash drop this nonsense.

Arrow could decide not to make wholesale changes to their story after Flashpoint resolves, but it’s “A Matter of Trust” to believe that anything in the first half of this Arrow season will matter. I don’t trust Arrow to make this first half have any meaning; it must be spinning its wheels for a reason, and if we’re to believe all the hype, Flashpoint may be the best reason.

The sad thing is that Arrow has a history of getting hijacked by another CW show. Legends of Tomorrow dominated the first half of last season (it did the same for Flash too), and if Barry Allen comes down like the hand of God and changes everything on Arrow, this creative team will have relegated Arrow to a second-rate show. I like Arrow—I loved it during its second season—and the DC TV Universe is affectionately called the Arrowverse by fans. If this doomsday scenario is the direction the creative team wants to take Arrow, it will turn a show that started a TV Universe into a second-rate show in the universe it created.

I get that the creative team wanted to make the Flash instead of Arrow. But if that was the case, why didn’t you start with Flash? I’m sure Arrow was an easier sell to TV executives, but since the show found success, you can’t ignore the show’s fan base. It’s clear the writers are bored with these characters, and the first rule of writing is that if the story or characters don’t interest you, they won’t interest the reader, or in this case, the viewers.

I was a little disappointed when Floyd Lawton turned out to be a figment of Diggle’s imagination. A live Deadshot would’ve given more validation to a Flashpoint ripple. As it stands, I think we’re in for a complete change with Arrow when Flashpoint resolves and the show’s creative team will have never given us examples of how Flash affected Arrow beyond one baby. Green Arrow’s greatest enemy could be his TV show’s writers.