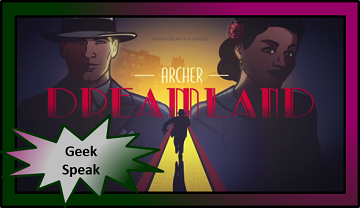 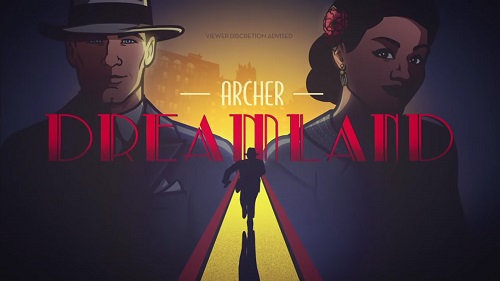 Archer keeps the series fresh by changing up its format and this year’s Dreamland, a film noir fantasy, is no disappointment. This season marks the first time the show has time traveled and I’m digging the era appropriate references, Archer gags updated for the new timeline, and Sterling’s backstory. There’s plenty to explore this season. Dreamland has changed Archer to an almost unrecognizable state but the principle characters are intact and you can tell the creative team (direction, writing, actors, and everyone else) is having fun.

I’m not the biggest fan of dream sequences, especially extended dream sequences, but Archer is upfront with the plot device, calling this season “Dreamland.” The show’s also a comedy and I’m more forgiving of comedies. Sterling’s in a coma and “Dreamland” is the world his mind concocts. I like how Archer has integrated happenings in the real world (minor spoiler: Woodhouse’s death and funeral) into the dream sequence. I wouldn’t mind seeing more of that; it’d be an interesting storytelling mechanism and with Archer’s ten-episode season, it might not get old before season’s end.

Sterling has been part of a drug cartel, the CIA, and a private investigator but the show doesn’t lose sight of who he or any of the characters are at their core. Dreamland looks to continue this trend. Yes, Sterling’s not a World War II veteran, finding new life as a private eye in 1940s Los Angeles but he’s the same, lovable bastard.

My only complaint, and it’s a small one, is that “No Good Deed” does so much world building that some characters get lost in the shuffle. We’re introduced to Cheryl, Lana, and Krieger and little more. Like I said, it’s a small complaint. Archer has a huge cast and rebuilding the show as a 1940 film noir detective comedy is a tall order. I expect the show to do more than mention these characters next week. And how great was it to see Other, Other Barry?

Dreamland’s a lot of fun.