We don’t usually write tributes to those we lost on this page, but we don’t usually lose an acting icon either. Leonard Nimoy might’ve tried to separate himself from his most famous character in his 1975 autobiography I Am Not Spock, but that was illogical as the pointy-eared, emotionless, half-human Spock, and the progressive world without prejudice of Star Trek in which Spock inhabited, shaped Nimoy of as a person.

Nimoy—who passed away on February 27, 2015 at the age of 83 from the end-stage of chronic obstructive pulmonary disease—later wrote a follow-up autobiography I Am Spock that showed him embracing his iconic character. To many Sci-Fi fans he was Spock, and he was the only Star Trek original cast member J. J. Abrams insisted on returning in his Star Trek reboot. But Nimoy was so much more than Spock.

The Boston born Nimoy started as a child actor and worked steadily on television before and after Star Trek, appearing on disparate shows such as Sea Hunt, Gunsmoke, and Mission: Impossible. In the ‘80s, he established himself as a film director, overseeing two back-to-back Star Trek installments (The Search for Spock and The Voyage Home) before directing the 1987 hit, Three Men and a Baby. 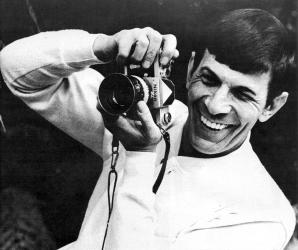 Once Nimoy got comfortable behind a camera, he shifted to photography, snapping pictures that hung in galleries and collecting some of his works in the book The Full Body Project, which he collected photos he shot of nude plus-sized and obese women. He later said that he wanted people to accept their bodies and show the bodies that people lived in, not the body types that fashion magazines sell.

That kind of sentiment speaks to how Nimoy’s involvement in a socially conscious series like Star Trek shaped his worldview. Through most of his work, Nimoy endeavored to shape the world into a brighter future.