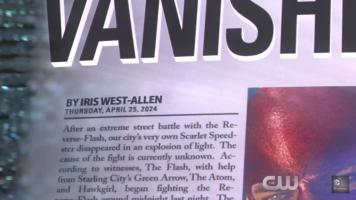 Newspaper from the Future

Just how many Easter Eggs are in that newspaper?

Founding Member of the Justice—

The comic based on the TV series The Flash added the line “Founding member of the Justice” before Barry cut off the Gideon AI.

Too bad we didn’t get the same nugget in the show itself.

Leave it to Cisco to drop random geek references in The Flash. This week, it’s a reference in my wheelhouse when he calls the room holding Gideon the Time Vault. That’s a Magic: The Gathering card. Yay!

Is it just me or do the lucid dream glasses Vibe wore this week look like his Vibe sunglasses in the comics? Oh, yeah. I can’t wait for him to get his vibe on. Okay. Maybe I can wait a season or two.

Yeah, that speed power shows up a lot in the comics. It looks cool and it’s effective too.

Cisco dropped another reference, this time an Indiana Jones and the Temple of Doom one.

The local News 52 showed up again in this week’s flashbacks. We got a look at the Deathstroke initiated riots in Starling City.

In the comics, the Thawne family is villain heavy. It could be that Reverse-Flash intends to draw something out of Eddie that Team Flash won’t appreciate and that we haven’t seen to this point.

Did you miss our Flash review? Check it out here.