This episode of The Flash mentioned a lot of important DC Universe cities. First up is beautiful Coast City. It’s located in California, and it’s the place the Silver Age Hal Jordan called home. If you also watch Arrow, you may have heard that show reference Ferris Aircraft from time to time. Ferris Aircraft has their headquarters in Coast City. And if you’re a comic book fan, you’ll know that Coast City got leveled during an alien attack in the 1990s, but has since been rebuilt. Who wants to go on a road trip? 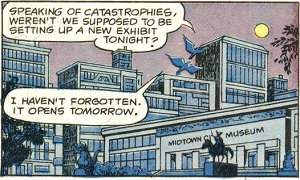 You’re in Midway City
If you drive by the real-life Detroit, Michigan, you might find yourself near the DCU’s Midway City. This might give you a point of reference to Caitlin’s saying Midway City instead of Coast City. She made a huge blunder as there’s a little difference between sunny California and Detroit. And how many people drive out of their way through Detroit to get to Los Angeles/San Diego?

When you’re in Midway City, swing by the legendary Midway City Museum, which is one of the DCU USA’s largest. And when you’re there, say hello to the museum’s curators, Carter and Shiera Hall—but you might know them better as Hawkman and Hawkgirl. Stick around too long and you might even run into The Doom Patrol, the superhero team that introduced Beast Boy among others.

You’re in Pittsburgh
Pittsburgh is home to a popular football team. Okay, that’s real world and in the DC Universe.

But Pittsburgh does play a role in Firestorm’s story. Dr. Stein did teach at a university in Pittsburgh, and one of his colleagues—possibly the one Stein mentioned in this week’s episode—still works there: Rip Hunter (AKA Time Master). Hunter could factor into the time traveling element, too, but Pittsburgh is also the home of Daniel Carter, and Daniel Carter is an ancestor of Booster Gold. Weren’t we promised Booster Gold before the series began?

But this could all be a huge tease. Both Stein and Ronnie Raymond lived in Pittsburgh for a time, and early Firestorm stories had him—them?—fighting baddies in the Steel City.

If you want to learn more about the DC Universe’s cities, check out our map here.

Solo-Dialogues
We didn’t hear Stein and Ronnie jack-jawing at each other last time, but we got to hear their internal banter this time. It’s a long-standing story in DC Comics that the people inside the Firestorm matrix don’t get along most of the time.

Those Piercing White Eyes
Superhero comics often have protagonists with no pupils, just white eyes. This week’s episode showed Firestorm with those same eyes. It might be a first for a live-action superhero, but it worked well.

Time-travel Movie References
This week’s episode stopped short of Hot Tub Time-Machine, but we did get some time-travel movie love. When Detective West didn’t quite understand time travel theory, Cisco name dropped some beloved movies: Terminator and Back to the Future.

Other References
This episode had plenty of other pop culture references. Most of which came from Cisco.
Dothraki: a wink and a nod to the language from Game of Thrones
Ross and Rachel: not another Friends reference
“Smash a hole in the space-time continuum”: could be a nudge-nudge, wink-wink to Superboy Prime’s infamous wall punch
“Dude, that was week three”: was Barry’s joke about The Flash’s third episode villain of the week
“Run, Barry, run”: was what Harrison Wells said in the manner he said it in The Flash’s pilot—sounds like Barry running really fast is the answer to everything

Enter Grodd
We saw full-blown Grodd this week. I loved the telepathy angle—and that is something explored in the comics. It works for the show. Was I the only one geeking out at Grodd’s cameo?

Head back to our Flash review here.