When Barry introduces himself to Lewis, Barry says that his name’s Sam. This might be a stretch, even though it tracks with what The Flash and Arrow have done in the past with namedrops, but Michael Ironside (the actor who plays Lewis Snart) portrayed General Sam Lane in the CW’s Smallville. Yeah, I’m sure The Flash was paying homage to Ironside’s role on Smallville.

If you were wondering where you’ve seen someone’s head explode in a similar way as depicted in “Family of Rogues,” look no further than Scanners, the Sci-Fi, horror film by David Cronenberg. We can’t—or shouldn’t—show you a gif of someone’s head explode but if the guy in the above gif looks familiar, he should: that’s Michael Ironside in Scanners.

There is a speed cannon in the comics but it has a very different origin. A scientist named Gorflack from the distant planet Savoth built the speed cannon to defend his planet from alien invaders. When he turned it on, the speed cannon brought Jay Garrick (the first Flash and Flash of Earth-2) to Savoth. Gorflack’s plan worked in a roundabout way because Garrick drove away the invaders. As a means of a thank you—and as a way to have a hero at his beck and call—Gorflack gave Garrick a shard of solidified Speed Force which Garrick and his successors could use to travel to Savoth. 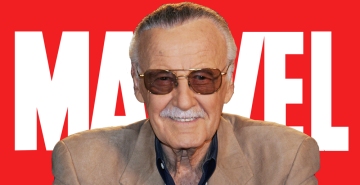 Excited about the success of the Speed Force Cannon, Doc Stein said, “Excelsior.” That’s Stan Lee’s catchword but I don’t mind that we have a DC/Marvel crossover.

Linda Park made her first appearance this season and she brings up plenty of questions. Will we see bits of post-Crisis Flash? Will Wall West, the third Flash and Linda’s husband, make an appearance? The only question we don’t have is whether or not Linda and Barry will reignite their romance. With Patty Spivot in the picture, that’s unlikely.

Here’s another nod to a DC Universe city. The meat packing plant in this week’s episode bears the name Danville, which is a reference to Danville, OH, the home of Lisa Jennings. While I don’t think we’ll see Lisa Jennings (a school teacher who picked up a kryptonite shard and gained the powers of Superman), it’d be a safe bet that Jennings could make an appearance in CBS’s Supergirl. The same creative team behind Arrow and The Flash is behind Supergirl, so there’s at least a chance that Supergirl will be a part of the extended DC TV universe. I wouldn’t hold my breath for a crossover though.

Yet another DC location name drop, Kahndaq is the home of Black Adam, Shazam’s primary adversary. This isn’t the first time Kahndaq’s been mentioned. The picture above came from one of Barry’s case files last season, but this is the first time Kahndaq’s been name dropped on either Arrow or The Flash TV show. There is a comic book tie-in for Arrow, called Arrow Season 2.5, which has a version of Black Adam. Could we catch a glimpse of Black Adam on the show?

So Lewis Snart implanted his daughter, a super villain, with a bomb in her neck. Does that sound familiar? It should. Each member of the Suicide Squad, who happen to be super villains as well, has a bomb in their neck (or spine depending on which version you follow) and they’re blackmailed into working for the government. I don’t know if this was a planned reference or not but it can’t be ignored.

The Salamanders are killing ‘em

When Barry and the two Snarts make their way into Kahndaq Diamond Exchange, there are two guards watching a baseball game in the lobby. The Diamonds are playing the Salamanders. Central City is home to the Diamonds as well as Barry Allen but they’re getting “killed” by the Salamanders and the Salamanders call Keystone City home.

Doing time after a diamond heist

“Family of Rogues” featured a diamond heist and Captain Cold is no stranger to diamond heists. At one point, Captain Cold went to jail after attempting to steal some diamonds. He ended up serving his sentence and was legitimately released rather than escaping. That doesn’t happen very often in comics, and I don’t think that’s how Cold will leave prison on The Flash. 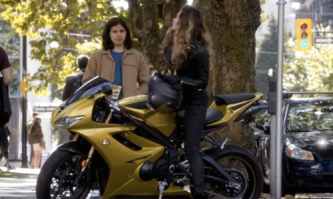 Lisa Snart rides off on a golden motorcycle at the end of this episode and the bike’s color can’t be a coincidence as The Flash fit in her super villain name, Golden Gilder, during the same scene. Could this be the new way Golden Gilder gets around?

Blue flames enveloped Doc Stein at the end of “Family of Rogues,” and those blue flames officially announced Ronnie’s death—perhaps. Deathstorm occurred in the comics when one of Firestorm’s two persona’s died. The surviving persona goes on a rampage until it finds another person in which to fuse.

We don’t know if that’s the direction The Flash is headed. Blue lightning also signified Zoom’s speed force, so there could be something to that as well. Perhaps some corrosive energy has found its way from Earth-2 to Earth-1.

If you missed our review of “Family of Rogues,” here’s a link. Thanks for reading.