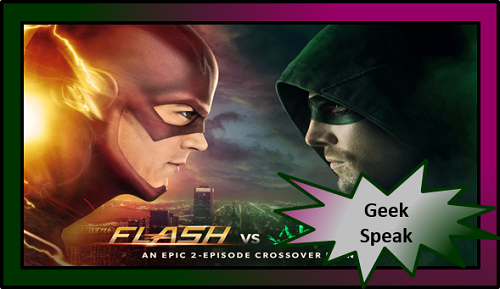 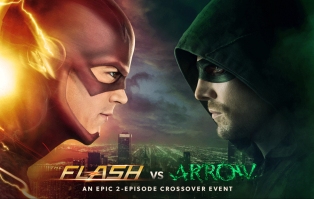 There was a lot to like with part one of the big Arrow/Flash crossover. The characters have definitely built a good chemistry, and it shows in their scenes together, even if the dialogue gets a little forced.

One of the big problems with these crossover events is they ask us to suspend disbelief a little more than usual. Case and point, if you followed my live tweets of the episode, I really didn’t understand why Barry wouldn’t have knocked out Damien Darhk and done team Arrow a huge favor. Instead of just pulling Oliver out of the fight, Barry could have won it for him. That’s the issue. These crossover episodes seem to invent new, temporary problems for the teams to focus on, rather than letting their respective storylines meet organically. Arrow has been dealing with Darhk, Flash with Zoom, but what we got was Vandal Savage.

Vandal Savage can be a great villain in the DC universe, but he was sprung on the audience without buildup, just to give the two teams a common enemy. The result of that is these crossovers are just holding patterns for the shows. They don’t really advance one story or the other, and my chief complaint with part one of the crossover is that it felt like a holding pattern within a holding pattern. The episode concerned itself more with squeezing as many cast members onto the screen as possible, leaving all the plot progress for tomorrow night’s follow-up.

Arrow/Flash came out as sort of a candy bar of a TV show. It didn’t do anything for me, but I enjoyed it while it was happening.

“Legends of Today” had nothing but empty calories. I ate the candy bar, had fun while doing so, and I’m not convinced if I was eating a solo candy bar or one half of a Kit-Kat. Flash and Arrow took a break from their regularly scheduled villains, and that’s okay, but the scenarios are contrived and waste good DC characters. Okay, Rainbow Raider wasn’t that good of a villain last season, but Vandal Savage deserved better.

I’d also like to see the two shows meet organically but hey, at least we got another episode of nothing but Legends of Tomorrow build up. That’s the golden ticket in the candy bar nobody wants. You did catch the episode’s name: “Legends of Today.” At least they’re preparing for tomorrow today. Nudge-nudge. Wink-wink.

Despite these two major drawbacks, “Legends of Today” did introduce a couple of elements that could shake up both shows, and both elements came in odd places. Velocity 6, the serum Wells and Snow created, should factor into the season’s arc in some capacity, and Ollie learned he might be a baby-daddy. That last element could—and should—show up during the second half of this year’s Arrow-Flash crossover, but both shows have shown they can develop amnesia any given week. Based on “Legends of Today,” I’m not sure anything besides new side stories will come from this year’s crossover, but I’ll have fun as I watch.

Want more Flash? Head over to our Flash secrets page. Thanks for reading.