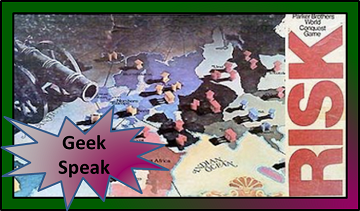 Game flow:
The goal is simple. Conquer the world.

A game of Risk begins with all the territory cards getting shuffled and then dealt evenly to each player. The cards in your hand will match regions on the board, and these are the regions you control at the beginning of the game. Each player then places at least one military unit on each region they control and they have spare units to deploy where ever they see fit. 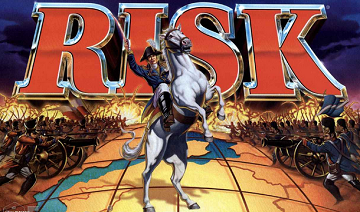 During a player’s turn, they begin by gaining reinforcements through the number of regions they hold, the number of continents they own, and turning in sets of cards (one card is earned each turn if the player whose turn it is conquers a land). Then, the player has the option to attack another player. 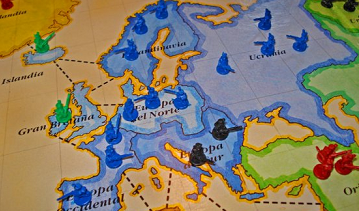 You can only attack a region from an adjacent region, and combat is resolved by a simple roll of standard six-sided dice. Whoever rolls the highest number wins. Defenders win all ties. A player can attack several times on their turn, and once they’re done attacking, they can move any number of military units (in excess of one unit) from one region the player owns to another region they own so long as there is a continuous route of regions the player owns from the starting location to the end location. 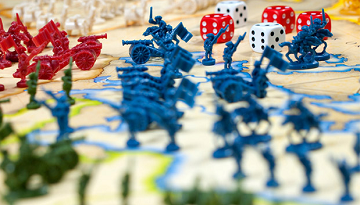 Play continues until all players are eliminated except for one. There can be only one.

Review:
Risk is another classic modern tabletop game that has aged pretty well. Even though the combat mechanics are not as sophisticated or as nuanced as other area control games, it has enough strategy elements to remain relevant in today’s tabletop market. 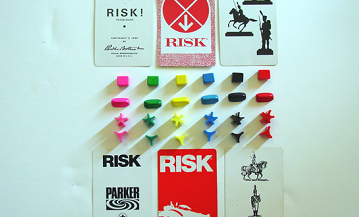 Still, there are some tried and true strategies that trump most others; so many games of Risk give you a feeling of déjà vu. That’s where the lack of gameplay nuance comes in. There just isn’t enough variety outside some unbelievable dice rolling that’ll leave you thinking that the game you played yesterday went a lot differently than the one you played today. Then, there’s the issue of player elimination. Not too many games practice this mechanic today, because today’s games have switched to a victory point mechanic in the hopes to engage every player, especially if it has a one to two hour playtime. The worst thing that can happen in a game of Risk is to get eliminated after one hour of play, but there’s another hour or two of gameplay left. Would you still be interested in who wins the game? I don’t think so. 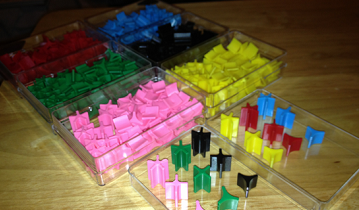 Risk – like so many other early tabletop games – has had plenty of tie-ins. Halo, Lord of the Rings, and even The Walking Dead have their own flavor of Risk. My personal favorite is Risk Legacy that allows for ongoing house rules that adapt to previous plays of the game, hence the name Legacy.

Verdict: Risk has left a lasting legacy on area control games that have endured today. It may have been surpassed by some of its offspring, but Risk remains an enjoyable game.